There was a different vibe at trade night last week.  Earlier in the afternoon there was a simple post stating that some older wax product was being brought in from the warehouse to be blown out.  And there was some juicy mid-90's product to be had.  From Topps Finest to Parkhust 'Parkies' to Pacific galore.

It was a blast watching guys crack open old, crusty products.  Laughing at the silly inserts, crazy jerseys and "remember me?" names.  It's hard not to get caught up in the event.

And there was one product that caught my eye early on, but I waited until later in the evening before taking a stab at it. 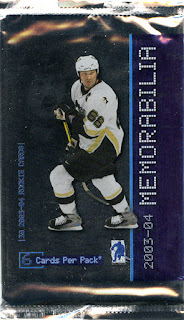 At $20 per box, I thought this would be a really fun break.  Long odds on pulling an Emerald parallel /10, but a great chance of hitting some sort of parallel.

And to top it off, how about the Mask III cards.....nice.

It really was a no-brainer and even nicer was the small crowd surrounding to watch the cracking. 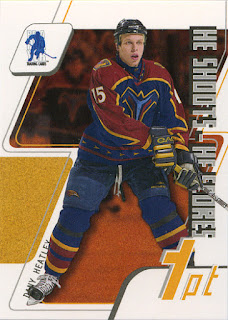 He Shoots He Scores!!!  Points that is.

Decoy cards that serve a purpose for those who want more than just mice type on them (or worse......blank).

Remember when Dany Heatley was good? 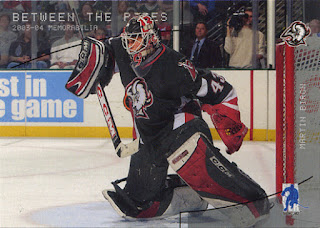 This product was heavy on the goalies (over half the checklist I think) and the horizontal card orientation makes some of these pieces look really slick.

Some decent photos (although some are a little dark) and some good vintage jerseys (if you can call the early 2000's "vintage"). 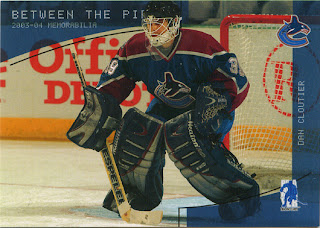 I hit one parallel.  A Sapphire Dan Cloutier /100.

Oh how one simple little goal just ruined his career. 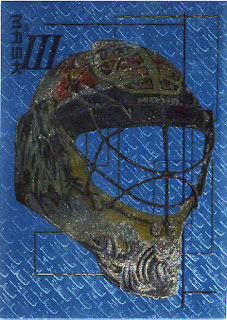 One mask card as well.  This Luongo was from way back when he was with Florida.  I liked his Pink Panther mask (the old school pretzel design on the crown of the mask looks sweet).

I was a little bummed that I only had two hits through most of the box... 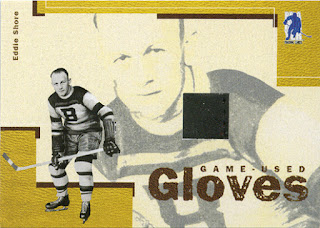 Limited to just 30 copies, this glove piece might be tiny, but boy does it pack an impressive punch.  Within moments of pulling this card, the remaining boxes of this stuff were sold - off the shelves and being ripped open by the other guys in the store.

I have no doubt that this card will let me recoup my box price (and then a little more).  But I'm contemplating just hanging onto it myself.  It looks really cool...and I've never had a vintage piece like this before.