'DID YOU KNOW' - Sylvester Flis

In my recent "cheap wax breaks" at the local trade night I came across a card that had me asking more questions than I had answers.

So much so that I decided to do a little research.....and thus another installment of 'Did You Know'.

On the weekend of December 6, 2003, In The Game set a first in the NHL trading card industry.  In their 2003/04 Be A Player Memorabilia Series product, they released a card that would truly be a barrier breaker.  A first of its kind.

I thought it was kind of cool and felt the need to share. 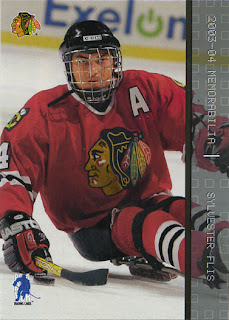 According to the NCHPAD (National Center on Health, Physical Activity and Disability), Flis, a defenseman for the Rehabilitation Institute of Chicago's (RIC) Blackhawks, has been playing sled hockey for 8 years (up to that point).  He was born in Poland and moved to Chicago in 1994 for rehabilitation purposes.

In the fall of 1999, Flis was instrumental in the introduction of sled hockey to the RIC Sports Program.  The RIC Blackhawks hold the title of the #1 ranked sled hockey club in the world (again...at that time).  Some of his accolades include...

Led the Hawks at the 2002 Malmo Open in Sweden where they became tournament champions.

Has had the honor of meeting President Bush.

Has been recognized by the Guinness Book of World Records in 2003 for the most goals and points in a single Paralympic Games.

Has been recognized in a proclamation by Mayor Richard Daley by the City of Chicago in May 2002.

"Considered the world's foremost sled hockey player [his card is numbered 99 in the set because of his dominance like Gretzky was to the NHL], Sylvester's contributions both on and off the ice are immeasurable.  Strong and swift with terrific anticipation, he is an offensive force despite the fact he patrols defense."

The RIC Blackhawks Sled Hockey program is supported in part by the Chicago Blackhawk Charities (and the NHL team continues to support them to this day).