Busy, busy, busy - that's been me at work, at home and everywhere in between.

Quiet, quiet, quiet - that's been hockey cards for me over the month of March (not a single Linden card crossed off the list in a few weeks).

The combination of the two is probably the biggest reason why I haven't posted in a week and a half.  But here I am.....ready to show off a new custom card I finally finished.

My past custom creations caught the eye of a fellow collector here in town.  During a trade night (oh about a year ago) he asked if I would be interested in taking on a ticket stub project.  And a pretty important ticket stub at that.

I said "Sure!"  I was up for trying something new.

And by the end of the design and assembly process, I definitely brought something original to the table (in my world anyways). 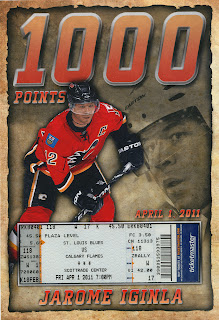 Jarome Iginla.  Probably the most popular, successful and endearing player ever to play for the Calgary Flames.  A lock to have his #12 jersey retired once his playing days are over (and an outside shot at the HOF), he hit the magical 1000 point mark a couple years back.

And wouldn't you know it, the guy asking me to put together a custom card has a ticket stub from the game - in St. Louis - where he hit the century mark.

So right off the bat I needed to come up with an oversized design template.  Having never done it before, I decided that I wouldn't be a slave to a certain size.  Rather, I would make the jumbo card whatever size suited the ticket properly. 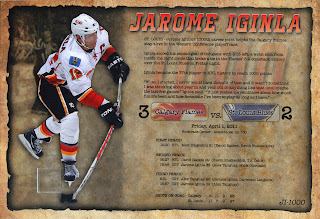 The back of the card shows a photo of Iggy from the game itself, a quick write-up from the evening and the boxscore.  I really liked the way the front and back work together.  Nothing too elaborate.  I wanted to let the text be the focus.

But there's something else that might have caught your eye. 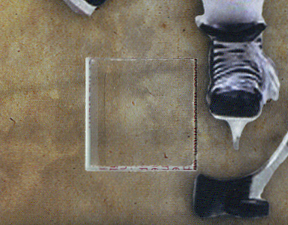 Whatever could this be?

This is where my creativity and "outside the box" thinking took over.

It took a little while (and some trial & error) but I was pretty happy with the end result.

Yup, the ticket is made to be slid out of the side of the card.  It's not the prettiest removal and reinsertion, but it can be done every once in a while.

More importantly, if ever this card becomes a little undesired down the road for whatever reason, the ticket can come out as if it never was a part of the jumbo card.

Curious to see how many more he gets in a Calgary uniform.
Posted by bamlinden at 11:59 PM