RAISE THE CUP - Some Pittsburgh Generosity

I've finally gotten around to some clean up/scanning of some of my pickups over the last month.  That short February really messed me up (at least that's the excuse I'm going with).

I mentioned that I had been the fortunate recipient of some generous gifts of late.  This post will show off some of the great cards to be added to my 'Raise The Cup' project.

Brian (Captain Canuck) from Waxaholic and Just A Bit Offside fame handed these to me at the last local card show.  I was thinking that I had most of them, but the parallel world of the 90's showed fine form and all but one of these cards would be added to the binder. 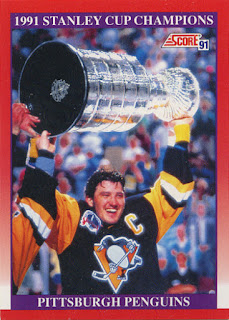 This Score Lemieux is one that I already had.  But I've replaced the one in the binder with this new gift.

This card pretty much epitomizes what the concept of the pc is all about.  Capturing that 'once in a lifetime' moment.  It's an awesome looking card. 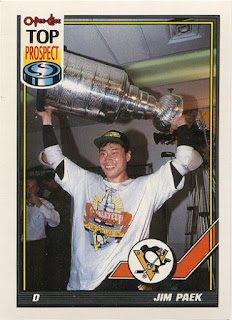 These locker room shots are so-so.  I'd much rather see him with the Cup as he's doing his lap in front of the fans.  This seems a bit 'after-the-fact'.  Still happy nonetheless.

This is the OPC version which will go nicely with the Topps version using the exact same photo.  Cha-ching. 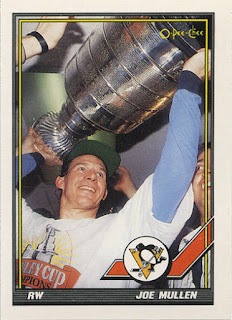 Joey!  This guy is one heck of an underrated player.  And even though Pittsburgh had some pretty massive firepower, it was the vets like Mullen that really cemented the Cup win. 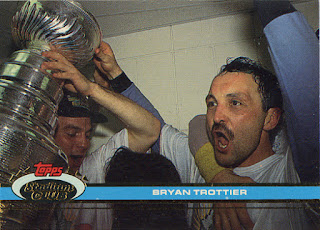 Second verse, same as the first.

This was Trottier's swan song and it's amazing to see him a part of such a team considering that he was a huge part of the New York Islanders dynasty of the early 80's.

I have no clue who the guy is holding the Cup, but I like to think it's Bryan's personal assistant. 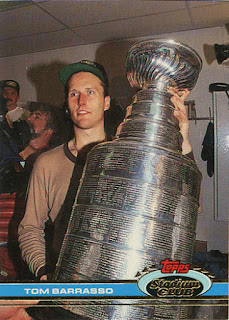 Tom Barrasso looks absolutely thrilled.  Or shocked that he backstopped the Pens to a Cup.

Thanks for coming out Tom. 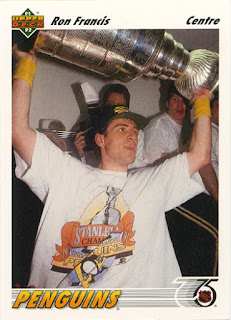 Ronnie Franchise!  This guy is THE MOST underrated player of all time.

This French Upper Deck card is a nice addition to the collection. 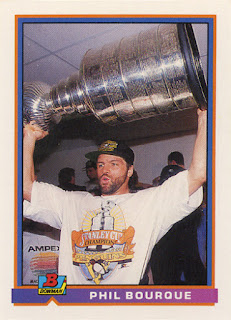 Phil Bourque......you lucky son of a gun.  I wonder if he realized at the time just how stacked a lineup he was playing with?

Nice photo.  Again, I would have preferred an on ice shot. 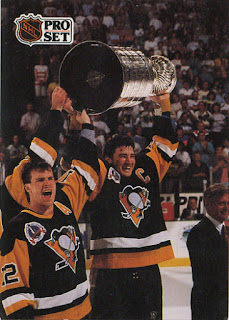 The front of the card looks identical to one I already have.  But again....it's the French text on the back that makes it a definite add to the binder.

Thanks again Brian.  I really appreciate the cards.