Another month down and another book off the list.  This past month was a bit of a blessing as I had a couple long plane trips and needed something to kill the time.  Nothing like a good book and an ipod full of tunes to make time go by pretty quick.

It also allowed me to get a bit beefier a book than the titles I've flipped through so far this year.  And I had this title on the radar ever since I saw the cover.

May's book is about the Boston Bruins' charismatic and controversial character - Derek Sanderson. 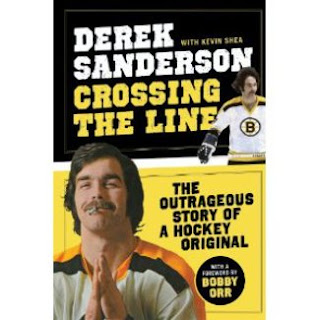 If Derek Sanderson doesn't epitomize an NHLer from the 1970's - nobody does.  He was born to play the game in that era.  Rough, unforgiving and often unfair.  He worked for everything he gained and then basically threw it all away.  Numerous demons grabbed a hold of him and it nearly cost him his life.

If you ever wanted to read a roller coaster ride of a story, this is the one to get.

Sanderson gained a strong work ethic from his parents.  His father really impressed on him to work hard - harder than everyone else.  His teammates with Boston continued that drive and no doubt, guys like Bobby Orr and Phil Esposito didn't hurt either.

But there were many other names that influenced Sanderson's career both on and off the ice.  Owners, coaches, fringe players.  Derek knew to keep his eyes and ears open and continuously learn.

Sanderson played in an era when player salaries were just a fraction of what they are today.  But to Derek, it was more about playing for the Bruins and getting paid what he thought was fair.  But the stars aligned and he was given the almost unthinkable opportunity to not only become the highest paid player in pro hockey....but in all of professional sports.  He could thank the upstart WHA for that.

Or maybe not.  The road that Sanderson decided to take led him down a path of destruction.  After reading the book, it's pretty amazing that he made it through to the other side.

It's a fairly well written book.  Engaging at times, but a little choppy in others.  He hits a few too many subjects and I think it would have been a better book if he narrowed the focus at times and just elaborated more.

There are some great stories from his playing days (and his pro career takes up a good chunk of the text) but his post-career tellings felt a little rushed - like he was trying to wrap things up quick.

This is a must for any Bruins fan, 70's hockey fan or anyone who like to read about the sensational side of hockey. 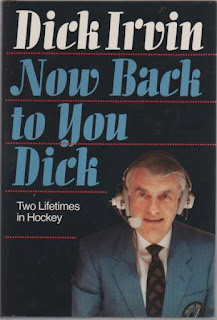