Still going through my Expo pickups and thought this would make for a nice little post.

Without sounding like a broken record, I like cards that capture a memorable moment in the NHL's vast history.  And while newer releases seem to do a great job of celebrating moments via insert or subsets, it's the older moments that can at times be overlooked.

Back when I was a kid collecting cardboard, there were few cards that would not only celebrate moments, but have the photo to match.  There are a few (and I find them really cool) but they are limited.

Some of today's products have picked up a bit of the slack and have really grabbed some nice photos to add to their sets. 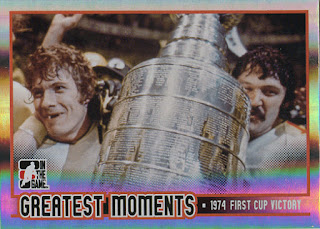 This card caught my eye on one of the discount tables at the show and I knew it would be coming home with me.  It's a super simple design, but it lets the photo do all the talking.  Definite win there.  It's got a nice silver foil finish and really reflects the light well (scans not too bad to boot).

Just look at Bobby Clarke's grin.  Dare I say iconic.  Parent looks a little squished in the shot and the angle isn't the most flattering, but the fact that I've never even seen this photo.....let alone on a hockey card is just awesome.


And as a bonus, I found another card from this all Flyers product.  And once again I knew it would be in the keepers pile. 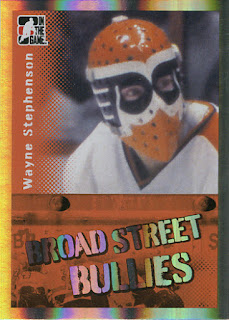 Now that's a goalie mask.  Pure vintage goodness.  Just look at the glare Stephenson is giving out.  I'd love to think that he's eyeing up an opposing player just ready for him to drift a little too close to the net.

And just as a topper....I love that ITG used the moniker "Broad Street Bullies" - that's what they were called as opposed to the product name Broad Street Boys.

Labels: Behind The Masks, Raise The Cup