Busy, busy, busy.  But not too busy that I couldn't catch some of the NHL Draft today at work.  Well done New Jersey.  I think that's going to be the steal of the draft.  Amazing to think that Vancouver passed on a higher 1st round pick, a 2nd and a prospect if the rumours about Edmonton were true.  That's division rivalries for ya'.

I also think the Tortorella Factor came into play HUGE.  I don't know if that trade happens if he's not coach.  Regardless, it creates even more uncertainty and questions in Canucks camp.  Gak!

It's been quiet on the Linden card front recently.  Although he's in both ITG's Draft Prospects product as well as UD Trilogy.  The list keeps growing.

I do have a couple show & tells, but they might have to wait another week until the zoo at work dies down.


Now on to my monthly book review.  I'm at the halfway point and I'm really proud of this year-long project.  It's been fun discovering some great books and great stories.  The toughest part now is deciding what to read and what to pass on.

This past month I've been flipping through a book that I've been meaning to read for quite some time.  I'm happy to say that it can be finally scratched from the list.

June's book is about the iconic broadcaster - Dick Irvin. 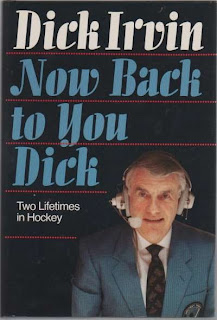 In simplest terms....I can listen to Dick Irvin talk all day.  His stories and descriptions are fantastic.  He comes across as someone who truly is meant to be in this sport - talking about the players, the atmosphere and the era.

On air he comes across as somebody who you could just sit back, relax and listen to.  The written word however is a little different.

Maybe it was me expecting something that wasn't there, but his delivery in this book just doesn't quite work.  The stories are quick, choppy and all over the place.  Flip to a page and you might find 2 or 3 different subjects he focuses on.  It's hard to really dive into.

I was also surprised at how much criticism he has towards today's (this was written in the late 80's) game compared to the game he literally grew up in.  I definitely get the feeling he yearns for hockey the way it was played in the 50's, 60's and 70's.  Sometimes he comes across as a little too critical for my liking.  Sure, one can have an opinion but there's not much follow up to his position.

There's a lot in the book about his dad and his coaching days.  I was hoping for less of that and more of his broadcasting career.  Again, I think that was my expectation (which I probably shouldn't have had).

Overall, not a terrible read, but would have certainly benefitted from a professional book writer as an assist. 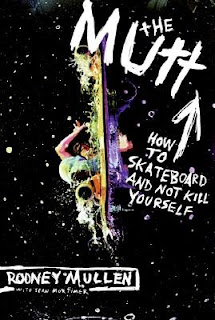 Inspired by the Bones Brigade doc that I recently watched (again) with my nephew.
Posted by bamlinden at 5:54 PM