LINDEN (PIECE OF MEMORABILIA) OF THE WEEK - Gotta Glove It!

And what am I going to do with it?  Saturday I'm taking my nephew to a skateboarding demo featuring none other than Tony Hawk.  Fingers crossed for an auto (but I'm not holding my breath).  Should be a fun day just the two of us.

Golf on Sunday and some time hanging out with my niece (she's got fastpitch provincials this weekend....good luck kiddo!).

But I found this box just sitting on my doorstep when I got home tonight.  I knew it was coming, I just wish the ol' postman wouldn't have left it in such plain view.  I hate when that happens.  Thankfully, the content inside arrived unscathed.

I received an e-mail a couple weeks back from a collector who said he had a Linden item I might be interested in.  Linden?  Sure.  Thing is....he had literally a "Linden item". 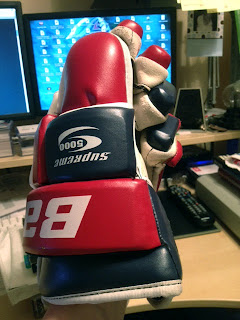 This game-used glove from Trev's days with the Montreal Canadiens was too good to pass up - especially since I was able to trade for it.  Did I "overpay"?  I dunno.  But I figured what the heck.

The previous owner said he picked this up at a Montreal Canadiens equipment sale.  Most pro teams do it.  Once a year, they open their doors to the public and sell off some of the jerseys, sticks, skates, gloves...you name it. 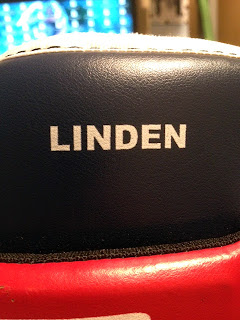 This glove was sitting in a bin full of "singles".  Meaning he only had the one.  No matching pair.

While that initially deterred me from acquiring it, I decided what the heck.

That Linden name screened on the glove flap sold me on it.  It looked cool and again - I traded for it. 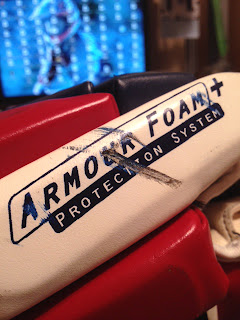 It's got some neat wear and tear to it but at the same time, it seems very lightly used for a game-used glove.  Very little palm wear and some areas look almost new.

But what the heck. 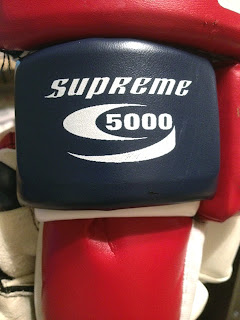 As always, I'm part skeptic.  As soon as I got it, I started thinking "Is this legit?" or is it a fake.  Lots of indicators say that it's the real deal.  But the thumb has me concerned.  It's got what looks to be a sewing defect.  I don't know if that's normal, but again...would this glove be used in a game?

As well, I searched as many Linden photos as I could find with him in the red and blue.  Not once did I find an exact model match. 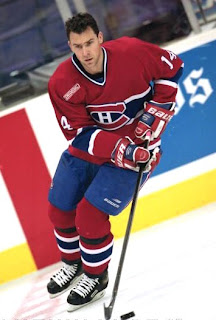 Close.  Real close on a lot of pics.  But nothing that is a perfect match.

So did I get duped?  Maybe.  But I don't think that somebody would go out of their way to trade a single game-used glove just to rip me off.  And it's not the first time I've taken a flyer on something.  At the end of the day - I like it.

Then again, I am a sucker.

But what the heck.  I think it looks cool.  And now I have yet another fun story to tell.
Posted by bamlinden at 1:46 AM

Labels: Linden Card of the Week, Outside The Box