I'm still trying to think what the Colorado Avalanche might do to their team before the season kicks off in a little over 2 months (didn't we just award a Stanley Cup?).  I'm extremely curious to see what the likes of Sakic and Roy will do to get what I think is a decent young crop of forwards going.

The defence is another story.

When I saw Captain Canuck pass this card over to me last week during trade night, those were the first thoughts that passed through my head. 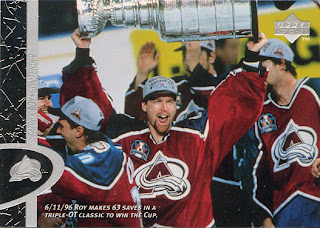 That was until he mentioned the stellar career Patrick had with the Habs.

A quick flip of the card revealed (full and complete) stats to that point of one of the greatest goalies ever to play in the NHL.  He was a lock for 25-30 wins each season (with 36 being his best in the 1991/92 campaign) and had already amassed almost 300 wins before being sent to the Avalanche.

And his success quickly came along with him as he won a cup with Colorado in his first season there.  Talk about an impact.

No doubt he's a winner - and I'm sure he'll be bringing that mindset and expectation to the team this year.

I'm just real curious to see how he does.  I enjoyed seeing what he could do on the ice but wasn't the biggest fan of his off the ice.  He's going to have a huge microscope bearing down on him all season.....so he better get prepared.

Regardless....it should be an interesting season.

Thanks again for the card B!!!