'DID YOU KNOW' - Doug Keans

It was a few weeks ago that I received a quick query regarding a name I haven't heard since my days of card collecting in the 80's.

A simple question.....but it brought a smile to my face.

"Have you got any Doug Keans cards?"

Doug Keans.  One of the best backup goalies of the 80's (seriously).  He teamed up with Pete Peeters to post some eye-popping numbers as a number two goalie in the Bruins net.

If it weren't for Andy Moog coming into town...who knows what might have come from Keans.

Anyways, I said I'd take a look.  And while I didn't have any stashed away in my closet, I knew there would be someone out there who would.

Cue the local trade night.  Last night as a matter of fact.  I made an equally simple query to the store owner and after explaining the circumstances, he was off to dig up the treasures. 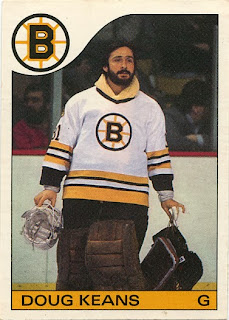 Oh yeah!  While not his rookie card, this Keans pic is a staple to his cardboard career.  Circling the ice during warmups ready for a solid night of benchwarming.

Remember goalies....pinkies up when carrying your gloves. 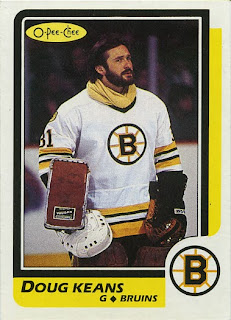 Another beauty.  The yellow towel gives the illusion of working up a sweat.  And is it playoff time or what?  Keans is sporting a mighty solid spring beard.

What's with the shifty eyes?

These cards just throw me back to the true fun days of collecting and watching hockey.  Check out that equipment.  I remember those helmets and I always tried to make my own blockers out of cardboard, foam and a spare glove (or not so spare sometimes). 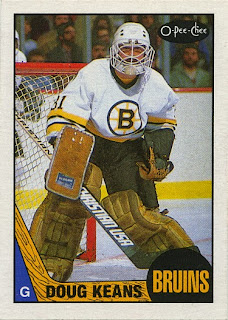 This last of the trio actually shows Keans in some game action.  LOVE the leather pads.  That brown just reeks of 80's.

Doug Keans was drafted in 1978 (6th round, 94 overall) by the Los Angeles Kings but it wasn't until he hit Boston that he put up some respectable numbers.

Like I said, when Boston brought in Andy Moog, Doug Keans became the odd man out.  After the 1987/88 season, he never played in the NHL again.  He finished with 96 wins in 210 career NHL games.

So...this is a 'Did You Know' post.  So what don't most of you know about Doug Keans?

'DID YOU KNOW' - Doug Keans now coaches for the Tampa Bay Junior Lightning hockey club.  Pee Wee A White if I'm not mistaken.

So to Colin (and his dad) over at The Hockey Life, get ready to add some cards to the collection.  Hope you have a fantastic season and learn a ton.


Now to the bigger question.  Does Doug look more like David Arquette... 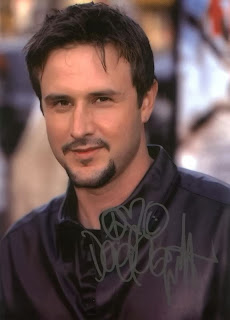 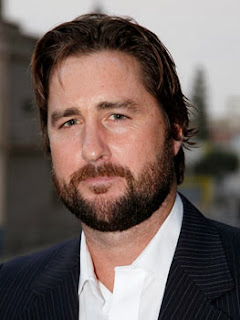 And a big thanks to Darren over at Maple Leaf Sports for donating these cards.  Know that they will go to a great home and be put to good use.
Posted by bamlinden at 11:01 PM