LINDEN CARD OF THE WEEK - Patching The Cup

With the Toronto Fall Expo over and done with for another year (and no...I did not make the trip), I have found myself keeping a close eye on the new Linden cards released.

For the past couple years, Trev has made his way into various redemption programs at these bigger shows and just keeping track of the new adds to the checklist can prove to be tasking.  The Fall Expo has no doubt brought a few more cards to the list.  I've already seen some Superlative: The First Six and Decades 90s hit ebay (and with healthy prices on them).

I'm finding that I'm less excited about these this time around and have decided to wait - maybe for a long while.  There are other cards that have piqued my interest more.

In the meantime, there have been a couple new Linden cards to hit the pc this past week.  One of which was a great find at an even better price. 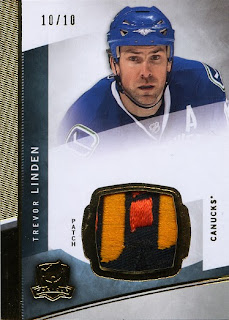 I've said it many times before....I love the patch cards that come from the ol' yellow and orange jersey.  This might not be the most elaborate patch design out of the 10 cards made up for this release, but so far it's been the cheapest.  That'll do me just fine.

The patch window is a decent size, but I would have loved to have seen a photo that matched.  And the middle of the card is just screaming for an autograph.  Either add one or give me more photo.

Still, next to the 1/1 in the release, this is the toughest of The Cup cards I have to chase down this year.  Me likes.


Now on the flip side, I picked up a Linden at the last local show (which also happened to run last weekend).  It's amazing how much I enjoy finding a simple base card if I need it.  That tells me that I am collecting what I'm supposed to collect. 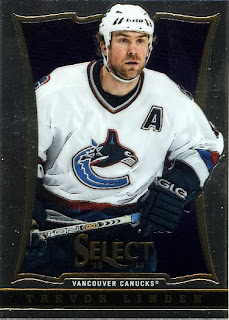 This is a nice looking base card from an equally nice looking set.  Shiny, nice photo.  But I'm lost as to why this product has come out so close to the release of Panini Prizm?  The sets seem very similar in many ways.  Especially the price point.

That....and the release of Upper Deck's flagship product Series I will likely put this Select product out of the minds of many.  It's a shame....looks like a nice set.

Anyways, I got mine.  Now to track down the parallels.

And yes, it does seem that a redemption version of this card /25 was released at the Expo.  One more for the list.
Posted by bamlinden at 10:15 PM