It was a weekend that I have been looking forward to for quite some time. We finally had a "big" card show here in town.  Not as big as Expo in Toronto, but definitely bigger than anything we've seen in over 3 years.  And I was thrilled to see it come to fruition.

I'll show off more of my goodies throughout the week.  Tonight it'll just be the Linden pickups.  And there were only two.  But two is better than zero. 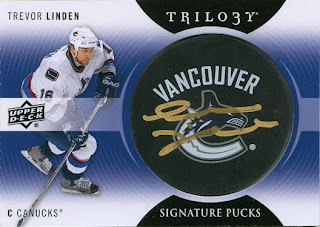 I was hoping to find a card like this locally.  There are enough copies of it out there that surely someone would have it.  The best part was that the seller hunted me down to tell me about it.  I like when other people find cards for me.  I like it even more when they don't try and charge "Linden Tax" on top of the price.

I made my offer and he took it.  A very simple and smooth transaction for a solid looking piece.  There are two parallel version of this card.  One with a retro logo puck /13 (on it's way) and a shield logo puck /3 (that one will be tougher to find since one is already tucked away in another person's pc). 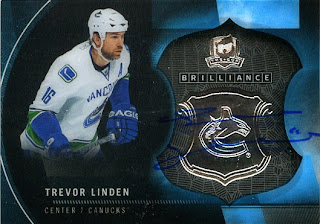 This card looks pretty sharp in person.  It is super-thick (for some unknown reason) but the brilliance logo and silver team emblem are recessed quite deep.  It's a nice effect (and surprisingly scans well).  The front is a little scuffy, but I don't think that was from mishandling.  The guy I bought it from knows his cards well.

His price was a little higher than I wanted to pay, but I bit on it since it's always nice to buy locally.  No mailing of cards or shipping fees.

I'm sure I'll find some go for less down the road, but this one will remind me of a fantastic card show weekend.

Stay tuned for more goodies and some shocking surprises (a hint...I started on one of my "bucket list" projects).
Posted by bamlinden at 12:46 AM