MY COLLECTION - An Action Packed Islander

One of the things I like most about card shows is when I find a card that I've just never seen before.  And I don't mean like an old vintage card...more like an unreleased promo or a local issued item.

I found a few cards like that at the weekend show (with most going to other people) and one will sit for a while in my collection.  I think it's just that cool.

But first, let me play a little "Six Degrees of Kevin Bacon". 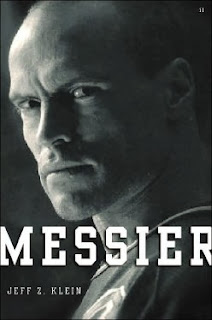 I'm currently reading this Messier biography (I know....Messier!!!).  But in all honesty I'm quite enjoying the first part of the book - the Oiler days.  It has taken me back to my first exposure to the NHL when the Oilers and Islanders ran the show.  There's some good stuff in there.

That got me on the whole Islanders thing.

And oh, by the way, here's the lovely inscription left in the book. 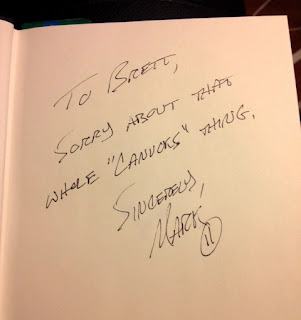 So kind to have it personally signed.  I'm glad he didn't rub any sort of salt in the wound.  One other thing I didn't realize about this book is that it's a die-cut.  When I'm done with it - there will surely be some cutting...and some dying.

Mark.....class act all the way.  (I was laughing out loud when I typed that).


Anyways, onto the card I'm planning on showing off. 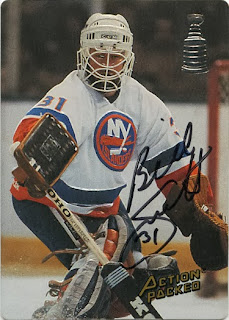 This card is one I've never come across in my decades of collecting.  Now just so you know, the auto is not normally a part of the card.  This one was signed in person.  Still, it's a beaut.

Part of a 10-card set released in 1993 to commemorate that year's Hall of Fame inductees, this Smith is the "big" card in the set.  It's got a matte finish to the background, rounded corners and is thick (to allow for the embossed feature of the player portion of the photo).  A silver Stanley Cup foil piece sits in the top right corner.  Pretty simple design if you ask me.

Which really makes you focus on the photo of Smith.  I remember everything about that.  The helmet (it's more mid-80's as opposed to the early 80's), the leather, the iconic jerseys and the scruffy beard.  Dude was always in playoff form.

The back of the card states that he is "considered on of the best 'big game' netminders of all time."  Can't argue with that.  Some of his best work came against the Oilers in the Finals.  He flat out stole games from them.

Not sure what'll eventually happen to the card, but it's got a happy home here for now.  Don't think I'll see another one of these anytime soon.
Posted by bamlinden at 11:37 PM