I'm finally cleaning off my desk!  There....I've said it.

I've got paperwork and cards strewn all over my desk - some dating back a number of months.  So tonight I spent some time putting cards away (and I did some scanning at the same time).

I noticed a common theme with a lot of the cards.  Pack ripping.

But I so enjoy ripping wrappers.  And a little bit every once in a while is ok.  As long as I get good stuff inside.

SPOILER: This is not one of those instances.


I was eyeballing some packs of Prizm on the shelf last month at trade night.  The shiny silver wrappers got the best of me and I bought five packs.

After hitting a bunch of blanks....I bought a couple more.

I put a stop to things right after that.  Ugh. 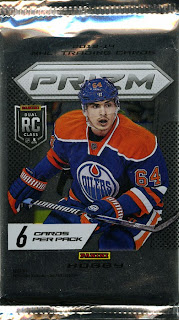 This is a nice product if you like shiny sets.  It's got a look and feel of the ol' Topps Finest products from the mid-90's.

How sad that I can't even remember how much packs cost...but I do know that it's not a low-end product.

There's a 300-card base set to chase with 100 of them rookie cards.  There are also colored parallel cards (with limited print runs), some die-cut goodies and autos...albeit stickers.  No memorabilia. 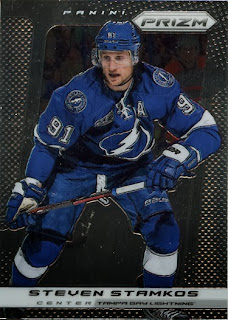 It's a nice design.  Nothing over the top (I think the shiny silver does enough of that).  Basic 3/4 body shots with not much action in the photography.

Player selection is ok.  Stamkos and Landeskog were my best base cards pulled. 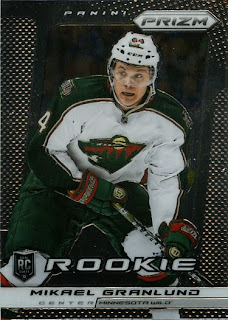 I mentioned rookie cards and they come one per pack.  Some guys I've never heard of before (in a double rookie class...not good).  This Granlund would be my best hit.  And that's not saying much.

Very similar look to the regular base cards.  I'm already getting bored. 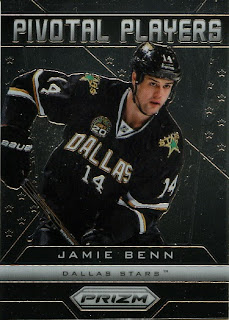 I did manage this insert.  It's not numbered...or rare.  I dunno, is this any good?

Quarter box it is. 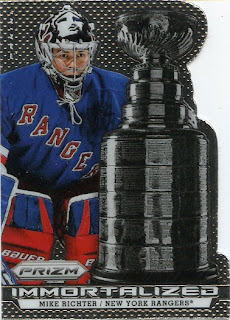 The "big hit" in my 7 packs was this Mike Richter Immortalized Stanley Cup die-cut card.  I think Panini has a bit of a love affair with putting full shots of The Cup on the front of their cards.

I need to refer to this post the next time I get the urge to open packs.

Who am I kidding....I'll never learn!

Now, back to my desk cleaning (it would go so much quicker if I just attacked it a little differently.....where's my garbage can?)
Posted by bamlinden at 11:22 PM