LINDEN CARD OF THE WEEK - Superlative: The First Six

Before I show off my newest Linden find, I'd like to say that I'm calling a bit of an audible when it comes to my December book read.

I've been flipping through Mike Tyson's autobiography...and I'm finding that I like it.  With it being nearly 600 pages and a library rental, I know that this book won't be finished before I need to return it.

Now I also went to the library this week to pick up yet another new hockey release.  Dave Bidini's Keon and Me.  Another book that I'm excited to read.  And because the book isn't due until the end of the month...and it's less than 300 pages, I'm putting it on the list of books to read this month.

Yes, I'm going to read both Keon and Me as well as Mint Condition.  And maybe some others.  What a difference a year makes.


Anyways, onto the card.

I saw this card pop up a couple times on ebay (as there are 9 copies of it made) and sadly, there was the ever popular "Linden Tax" added to the asking prices.  It was an easy head shake and an ignore on those auctions.

But then I saw someone on the hobby boards show off a copy.  I quickly inquired and we made a very prompt - and fair - deal.  The card was shipped off and it hit the mailbox today.

It's one that (like a few others this year) has me questioning why...but it is another card on the list - and now scratched off. 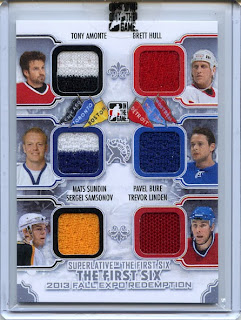 A nice card - yes.  But let's take a closer look at this "ode" to an Original Six era.

I know there are some die hard collectors that pick off cards with these players on it.  I can only think that the popularity of these players (even though their association with the teams depicted on the card) lends heavily on them being added to this set.

I just can't get excited about a card like this.  I feel like I have picked it up just so it can be scratched off my wantlist.  That's it.

It's been a bit of a frustrating year with some cards of his coming out, but I'm trying to keep my main collecting venture a fun one.  I think that's why I've passed on many of his cards recently.  It's just not as fun.

Oh, and by the way, in case any of you were wondering - the card is out of the sealed toploader.
Posted by bamlinden at 10:25 PM