My, my, my.....what a difference a day makes.  A trip to the local card show with a renewed purpose and a bit of digging in my own personal collection has created a monstrous show & tell post.  Probably the biggest single day haul I'll have for this new project.

I'll begin by showing off the new adds from my existing collection. 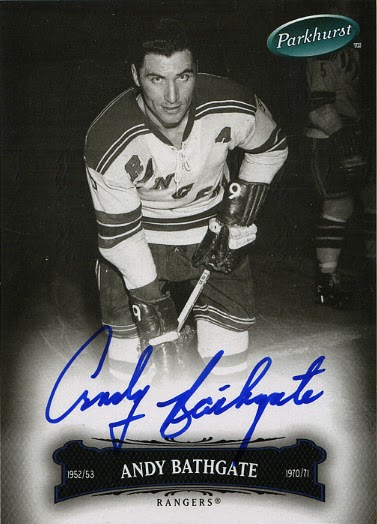 I purged a few cards from the 'One Sheet, One Set' Parkhurst page I built.  While it was tough to split this page up, I felt that these Hall Of Fame cards belonged in this new project.  I'm sure I'll fill the holes nicely with other hard-signed signatures.

To me, Andy Bathgate will always be the guy responsible for drilling Jacques Plante in the nose with a slap shot that caused Plante to don the goalie mask in 1959. 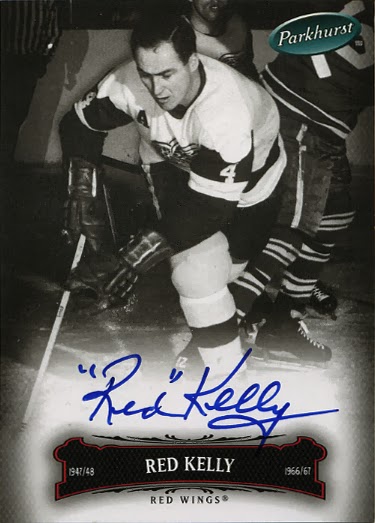 This card has become the earliest inducted member in my project.  I'm curious to see who holds that distinction when I've reached card number 100.  I'm going to predict that there will be older. 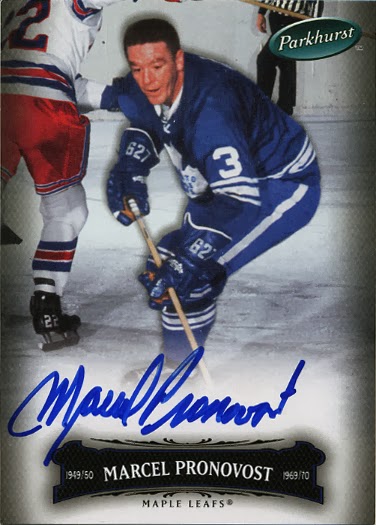 I like this card, but there might be a different Pronovost that makes it into the collection.  There's another one that I have my eye on.....if it's available.

Marcel's sig is slightly off center.  It's messing with my Fung Shui. 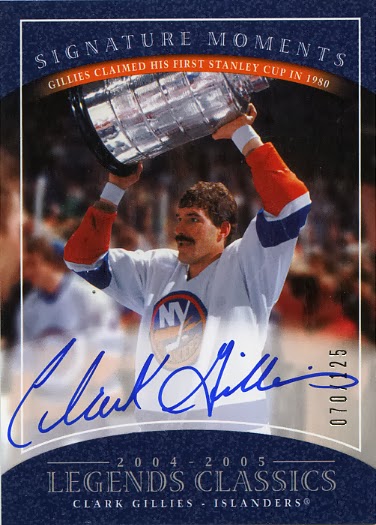 Clark, or as I like to call him "The guy who consistently gets named when the subject of who shouldn't be in the HHOF comes up" lays down a killer auto on this sweet card.

Pulled from my 'Raise The Cup' set, I had to move it to this new project.  It's just too nice of a card.  I'll be looking to replace it with the non-signed version. 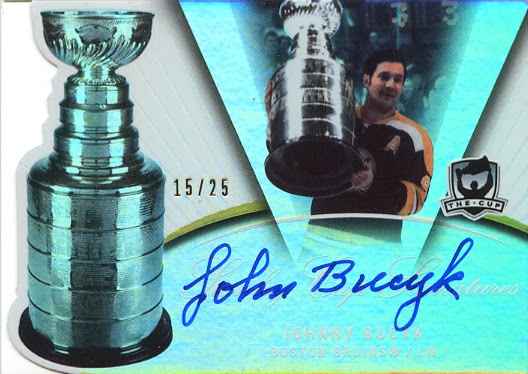 Another card that was slated to into the 'Raise The Cup' set, The Chief gets moved into this new group.

A gorgeous card that just shimmers in the light.  So much so that the scan is blown right out.

So far there's been some great variety in the card releases and designs.  I hope to keep it up.


And so was the case on Sunday when I went to the card show with my traders.

I hit the show on Saturday and let a couple guys know of my project.  They said they would do some digging and I was excited to hit the show on a rare Sunday.  I did not go home disappointed. 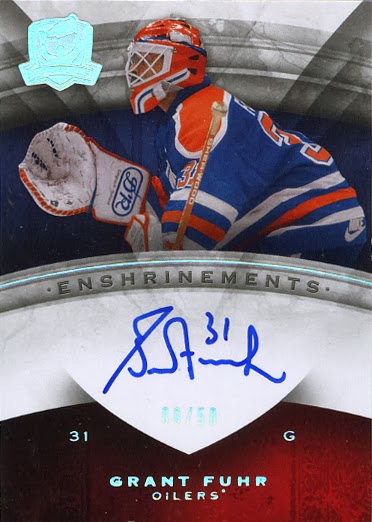 I'm loving the fact that I've added some Cup cards.  They look great and really add to the beef of my collection.

The photo used on this card is an interesting one.  It's got Grant wearing a mask that I personally don't associate with him that much.  But the orange looks fantastic. 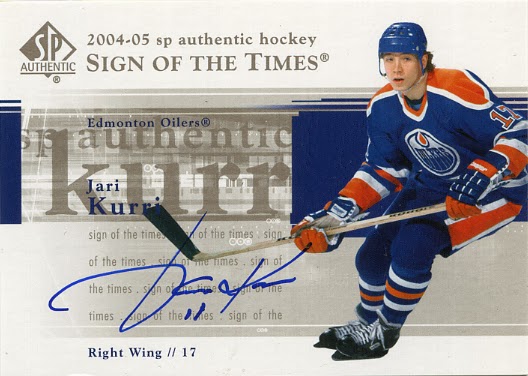 This was a last minute find.  I had a couple dealers scramble to find cards for me (I must have had some solid traders with me that day).

I'll be honest, I didn't think that I'd have some pretty solid HOFers so quickly.  I was expecting the Adam Oates and Bernie Federkos to be knocked off the list first. 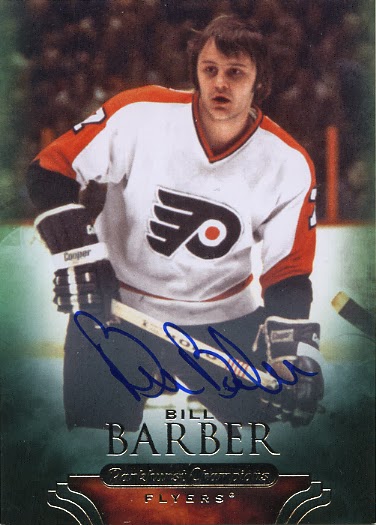 And thank you Bill Barber.  Here's a guy that would be on the low end of the desirability scale.  If there was a "common" player in this project....it would be Barber.

That said, I'm glad I was able to get him on this Parkhurst Champions card.  I have no doubt that there will be more from this product making an appearance before all is said and done. 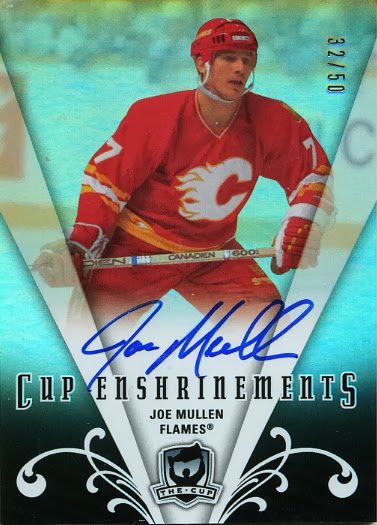 I like that I was able to get Joe in a Flames uniform.  I remember him more from his days in Calgary than in St. Louis or Pittsburgh.  That's something I'll be keeping a bit of an eye on for future cards.

Another Cup card too.  Love it! 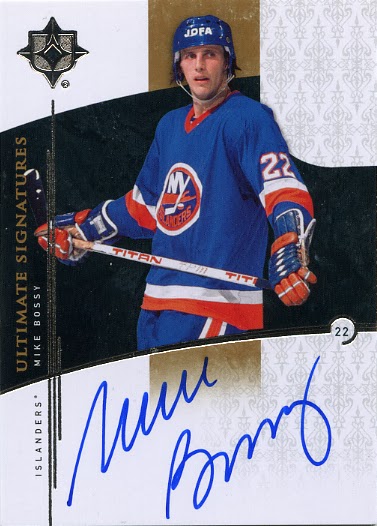 This is a gorgeous card.  Love the design, photo, and huge signature along the bottom.  Really happy to have been able to trade for this one.

With some guys, there are so many cards available out there.  I'm pleased to have a quality piece for this star sniper. 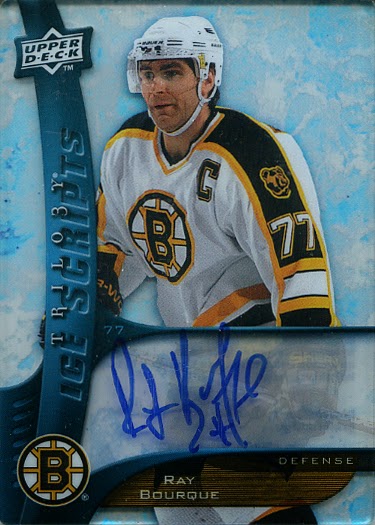 Didn't expect to get this one, but I think it's a fantastic add.

Unique looking card, great signature.  It's cards like this that make me really excited to start this project. 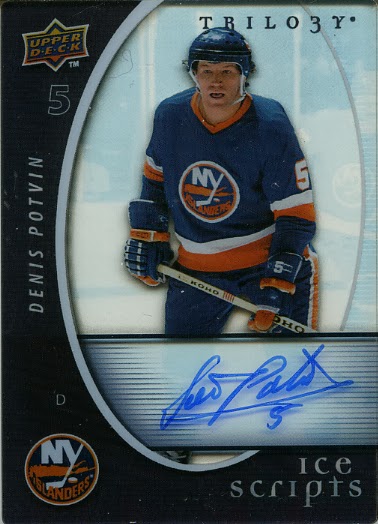 Denis Potvin gets ZERO hobby love.  And that is a shame.

Except in this instance.

Can you believe that this card would have a hard time hitting $7 on ebay? Maybe he just signs too much.  Maybe he got lost in the Bobby Orr, Ray Bourque world.  Maybe he just sits second...third....fourth fiddle - ON HIS OWN TEAM.

Whatever the case may be, Potvin (along with Marcel Dionne) just do not generate any sort of excitement in this hobby.  But I'm really happy with this add.


One last card to put in this show & tell.  He's in the Hall Of Fame, but is not a player.  I decided to pick it up because it was more of a throw-in on a trade. 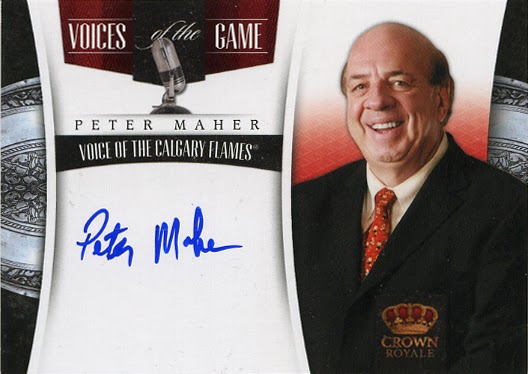 The "Voice of the Flames"....Peter Maher.

And a little tidbit for you.  His daughter and I were in the same class in elementary school.


And a quick couple adds on the "rules"

Rule #6 - No cards with jerseys or patches on it.  Autograph only cards.

Rule #7 - No oversized or mini cards.  I saw a couple Parkhurst Champions minis that had me contemplating....but I'm holding off for now.  I might go back and revise this later.  Again, Fung Shui.


I can't wait for the next trade night.  Hopefully I can continue this torrid streak.  And it's so much fun re-discovering the art of the trade.  So simple....yet so many have forgotten about it.

Current Collection - 17 HHOF Autos
Posted by bamlinden at 1:35 AM