NEW PROJECT - Because I Just Don't Have Enough On My Plate

I finally am pulling the trigger on my newest project.  And a lot of the inspiration for this side project comes from Casey over at Drop The Gloves! (or what used to be.....he looks to have a new site launching in a week or so.  I for one am excited to see what he's up to).

A number of months ago, Casey showed off his Hockey Hall Of Fame autograph project.  An impressive collection of signatures representing the players inducted into hockey's ultimate shrine.  It got me thinking.

Much like my "Raise The Cup" project, I liked the fact that Casey's autos captured a piece of hockey's rich history.  Those cards (for decades to come) will stand the test of time as a collection of players that have reached the pinnacle.  It got me thinking.

Last year I was drawn to a couple cards that just spoke to me.  Spoke to this new project of mine.  And I decided to add them to my collection.  At first I kept the cards in my trade box as I contemplated what it was I wanted to do.  But now I have pulled them aside and they now sit in my personal collection.

So with that, let me introduce to you my new project.

(I'll show off the cards first and then explain the parameters of my venture). 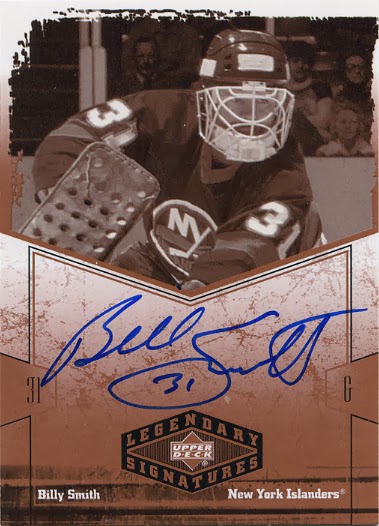 This card was one that drew my eye instantly.  The Islanders dynasty of the early 80's was right in line with my introduction to hockey and hockey cards.  So many great memories of that team and of that time period.

It was a no-brainer for me to pick this card up.....especially with the low price tag on it. 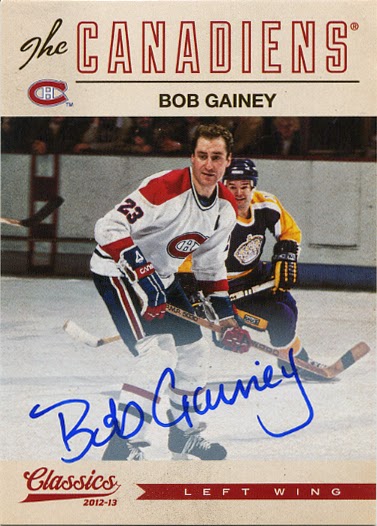 And Gainey has a great signature to boot.  A steal for a toonie. 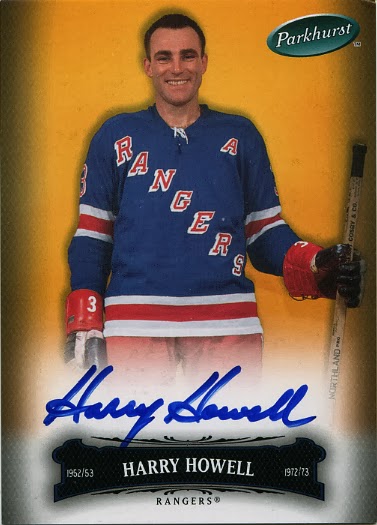 An oldie (in this early incarnation of my collection) but a goodie.  This card comes from my all-time favorite set, the 06/07 Parkhurst product.

I'm predicting that this won't be the last time we see a card from this set pop up. 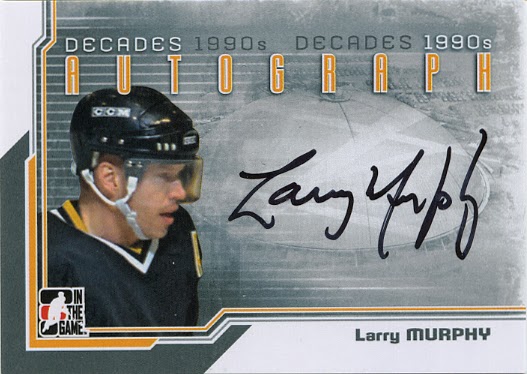 I pulled this card from a pack of ITG's Decades 90s just last month.  At first I thought of not using it in my project as I was contemplating going with just vertical cards.  But then reality set in and I decided that it would be too limiting.  So in it goes and it'll soon be joined by other horizontal sigs. 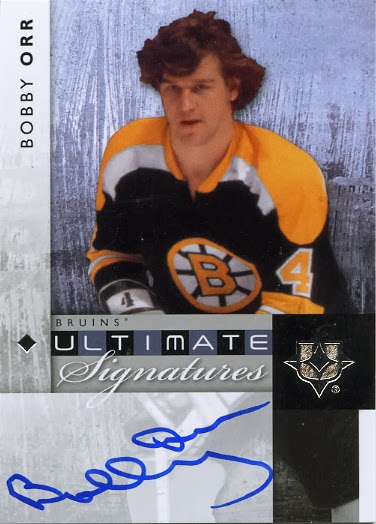 Much like the Billy Smith, this Bobby Orr card spoke to me.  Spoke to this project.  And after I successfully traded for it, I started to form the ideas that would be basis of this collection.

One of the big sigs in this portion of the project, Orr's addition to my pc really makes this an attainable and exciting start down this road.


So that's the "first five".  A good way to kick things off if you ask me.  So now (as with every side project I have) I've decided to set some simple parameters.  Call them loose "rules" which will hopefully keep things fun, affordable and challenging.

Rule #4 - (and this is the big one) I can only acquire cards through trading.  No money will be shelled out to purchase any card from this point on

Now, You might be thinking "How will you possibly trade for the likes of a Howie Morenz, Cyclone Taylor or Georges Vezina?"  Well, here's where the last piece of the "rules" puzzle comes into play.

I think it is very realistic that I can trade for 95 more HHOF hard-signed autographs before I run out of cards in that wheelhouse.


And with that, you have now witnessed a new birth in my collecting world.  Cigars will be handed out in the near future.  I hope you enjoy my future posts as much as I will enjoy hunting down new cards.  Anybody ready to trade?

Current Collection - 5 HHOF Autos
Posted by bamlinden at 1:44 AM