Tonight was one of the monthly trader nights that I regularly attend.  And while I go in always optimistic that I can come away with something new, that's not always the end game.

But tonight was not that.  In fact, it was the opposite.  I was able to walk away having made many trades.....possibly even the most I've made in a single trade night.

And that means some show & tell posts.

Tonight will be short and sweet though as I am tired and ready for sleep. 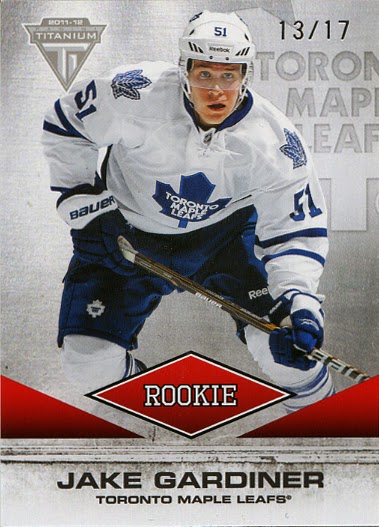 After months of a stagnant project, I have added two cards to a set that only has a handful of cards left on the wantlist.

I was sifting through one of the numerous trade boxes at the store and came across this beauty.  I was pretty sure I needed that number but a quick check of the list confirmed it.

I couldn't believe that I tracked down a /17 locally after all this time.

What made things even better is that I was able to trade for it with supreme ease.  I couldn't have asked for a better transaction.

What made me laugh is that when I told some people that I needed this card for my project, some of the guys forgot all about it.  It had been so long since I really had been making dents in it.  Some thought I finished it, some thought I gave up on it.

Not so fast.....it's still on the radar.  Always will be until I hit that last card.

So with this number crossed off, I am now down to FIVE cards.  I know the end will come one day (and I could probably speed things up if I were a little more aggressive in searching) but the fun of just letting this project breathe on its own is really rewarding.

And it makes a find like this even more fun.