I love toonie bins.  Especially when there are cards that I need in them.

At last weekend's card show I tracked down a bunch of them.  And once again - patience paid off.

For the better past of a year I have been slowly (very slowly) tracking down mask cards from the Masked Men 5 set put out in the Between The Pipes product.  I don't really chase this set as aggressively as I could, but with so many Linden cards out there I have had to slow my pickups on other projects. 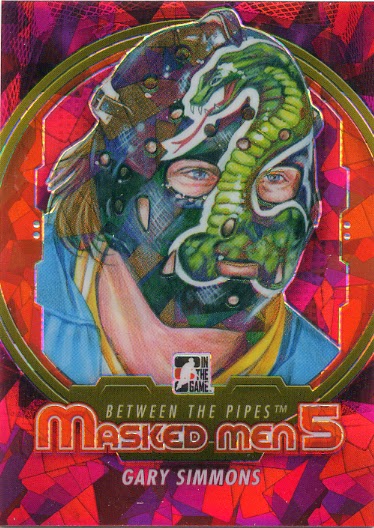 These cards have slowly dropped in price month after month - a result of declining desire.  The shiny cards don't have the same "wow factor" when new shiny cards come out every few weeks.

To me though, they are still shiny.

I really like this version of the Masked Men product.  No blurry photos, no junior players.  Just some good ol' NHL goalie masks - current and vintage.

And I'm a sucker for vintage.

C'mon....who doesn't like that Cobra mask from Gary Simmons? 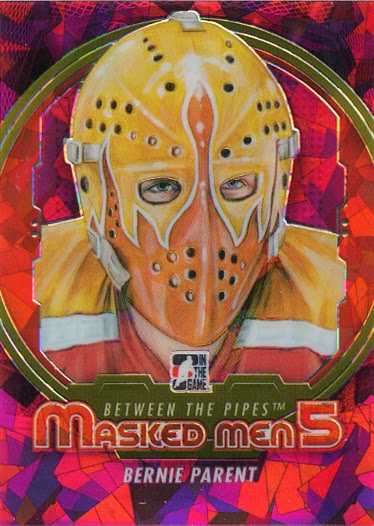 Or this sweet lid from Bernie Parent's WHA days?  It's not the mask many remember him wearing during his career, but the iconic photo of Parent in this mask just trumps all of his Flyer offerings.

So much so that the photo is my computer wallpaper at work.  It's just that good. 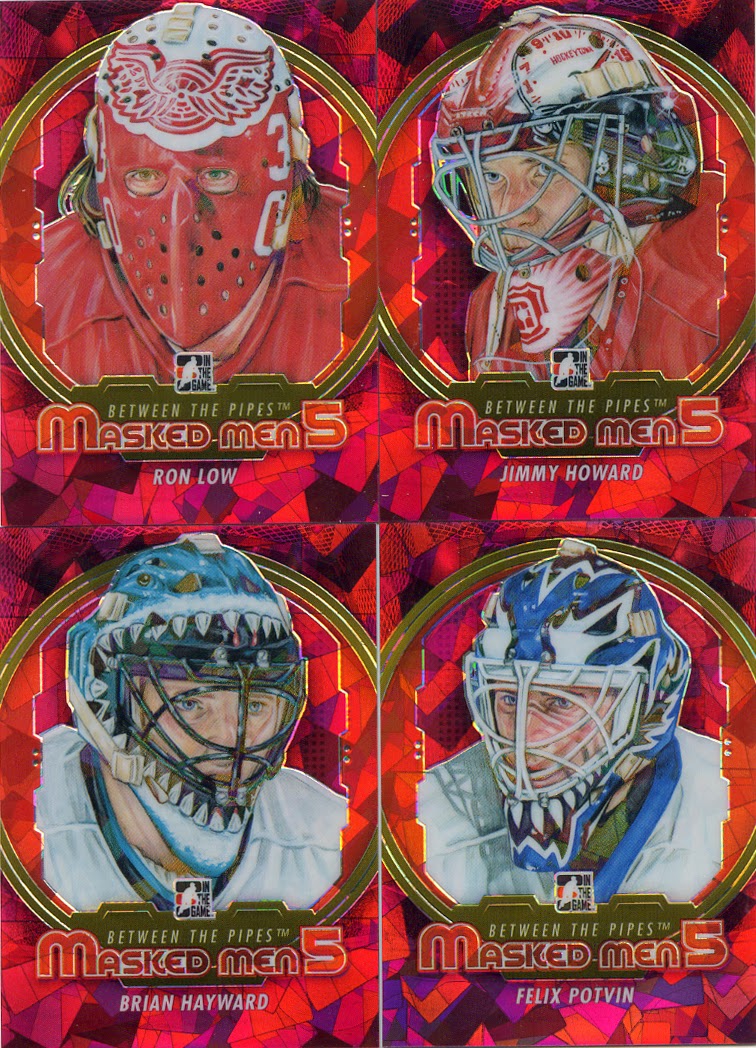 Like I said, old and new.  Both have their distinct qualities - both good and bad.

The simplicity and bold colors of the vintage.  The intricacies and detail of the current.

It's a solid checklist put out in this In The Game offering.  And I've heard that there are some new faces in this year's product....so I can only hope that it means new goalies and new masks added to the 2014 checklist. 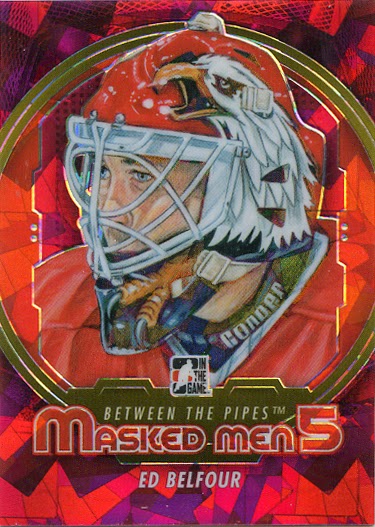 This old school Belfour looks fantastic.  It's one of his early Chicago masks since his later offerings (with all teams) had the hidden "Eagle" name written in the feathers.

This mask looks a lot more menacing - as did Eddie's style of play when he first came into the league.  Can you believe that was about 25 years ago? 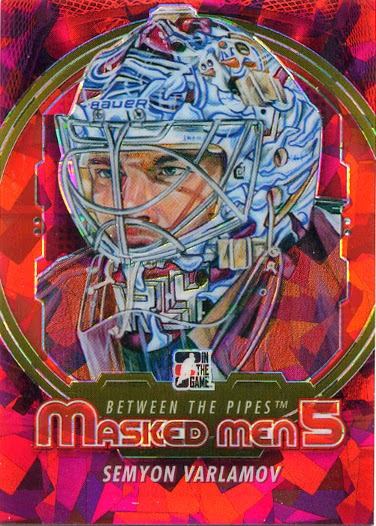 I like detail....but this is just a bit too much.  Can you even make out what this mask is all about?  I can't.

That's the struggle with current goalie lids.  The airbrush techniques used can be so intricate that it takes away from the whole picture when you step back to observe.

I like masks that have a bold statement from afar but can be appreciated for its detail up close. 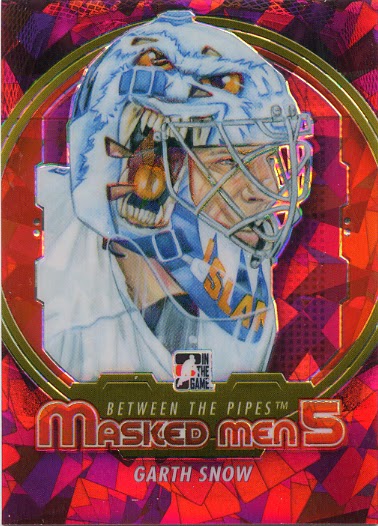 I kind of liked the abominable snowman look.  It kind of suited him.  Too bad he was better knwon for his mask than his play on the ice. 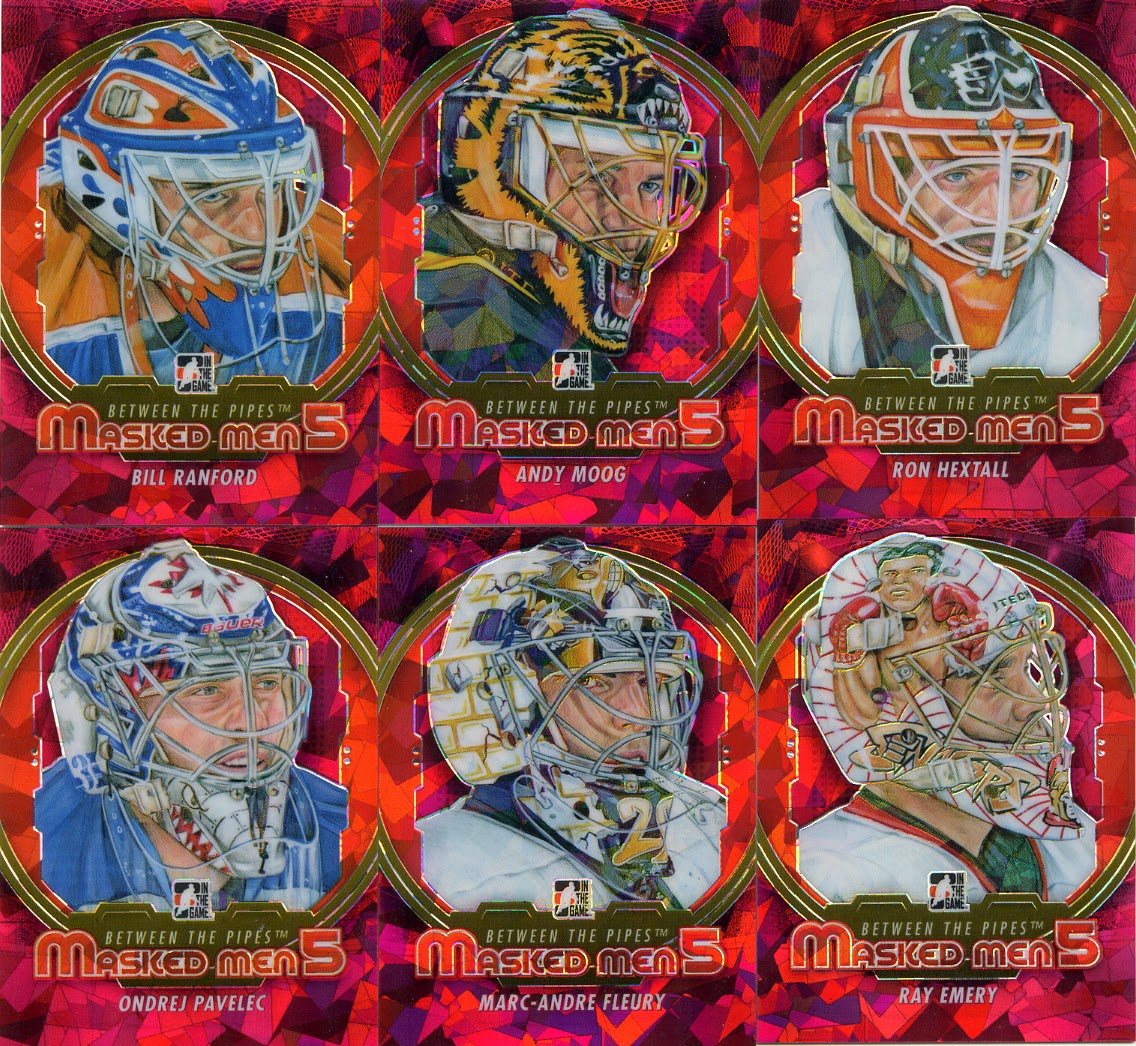 Here's more of the gang.

Now everyone on the count of three.....look to the left.

Some great 90's masks and some memorable helmets from todays goaltenders once again. 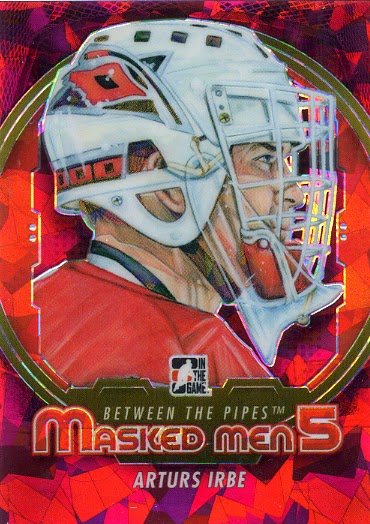 Actually....I take that back.  THIS is a helmet.

And really.....shouldn't be included in a set like this.  After all, it's a goalie mask set - not a goalie helmet set.

Just for fun, let's create a list of goalies that could create that checklist.

I'm loving the looks of this already.

Oh the list could go on forever.  But let's not do that.

All totalled.....SIXTEEN Masked Men 5 cards were added to the collection.  And the wantlist was hugely reduced.  I still have a few left to "chase".  Heck, I have cards from each of the five years of Masked Men cards still on the list.

Is it patience or laziness?  Same thing to me with this project.
Posted by bamlinden at 11:37 AM