BEHIND THE MASKS - Razor Ray

A pair of bubble envelopes hit the mailbox recently.  Both with cards that are going into non-Linden pc's.  I like when I can add to some of the other side projects I'm building.  Makes my collecting feel a little more diverse.

One of the sets I'm building (very slowly) is the 2010/11 ITG Between The Pipes Inspired Masks set.  These cards were the first that really struck me in terms of a "sketched" mask card as opposed to a photo.  Over the past couple years, this technique has become the standard for ITG's mask sets.  And I for one like it.  Beats the sometimes out of focus closeups that can occur with older, rarer photo offerings.

I don't normally pursue these cards with any sort of aggressiveness.  It's more of a "Hey.....let's see what's going on this week."  And on occasion there's card or two sitting on ebay.........overpriced.  And I go back to lurking for Lindens.

This particular pickup had been sitting lonely for quite some time (a good year at least) before finally being re-posted with some options.  Options that eventually led to my obtaining it. 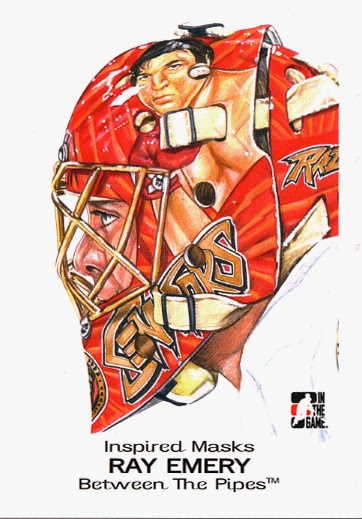 For some reason, Ray has two cards in this set (same with Carey Price).  The concept being goalie masks with people painted on who have inspired the goalie.  In this case....heavyweight boxer George Chuvalo.  A man who has quite a story himself.

At the time, Emery was playing with the Ottawa Senators but a major hip issue knocked him out of action for months (and even threatened his career).  He eventually returned in a backup role with the Anaheim Ducks.

Ray has had some questionable moments in the NHL.  Brash, bold and never one to shy away from the situation, he can be your best ally one moment and your Achilles Heel the next.

I remember the uproar with Emery's original boxer mask design.  A guy by the name of Mike Tyson.  At the time, Tyson was severely shunned by the public (and to some still is).  He's one who does not have a shining past.

Emery stood his ground - for a while, until the Senators finally made Ray change up his mask design.  Check that.  Senators GM John Muckler "had a discussion" with Ray about what was right and wrong.  And Ray made the decision to go with another lid.  Yeah......that's it.

I plucked this card off ebay as it had sat as an overpriced (in my opinion) Buy It Now for months.  Finally the Best Offer option was tagged on to the auction and I decided to strike.  One price - my best price.  I'd go no higher.  The seller bit and I bought.

This puts me down to four cards left for the set.  One of them being the other Razor Ray Emery card in the release.