Fair warning to you all....these cards do not look good scanned, but are fantastic in person.

Six more cards were added to the HHOF Autos project on Sunday, one of the best weekend hauls I've had to date.

The addition of a number of HOF signatures in the new ITG product Lord Stanley's Mug has a lot to do with it.  Good autos for a low price.  Make it easier to trade for. 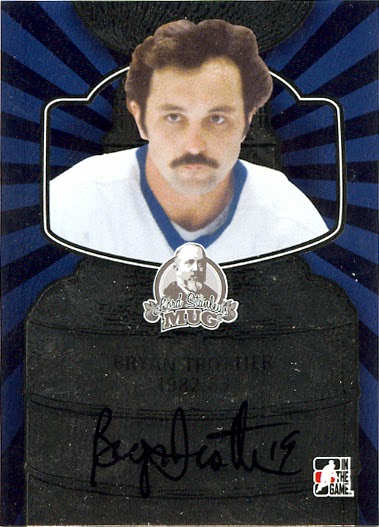 When my 100-card project is complete, I'm sure there will be a number of New York Islanders representing.  They are from an era that is near and dear to my heart as it was really the time when I discovered the NHL.

Trottier was at the forefront as I was probably a bigger fan of his than Bossy.  Billy Smith though took the cake.

Trottier has a nice solid signature (if you could see it) and his penmanship hasn't drifted a bit over all these years. 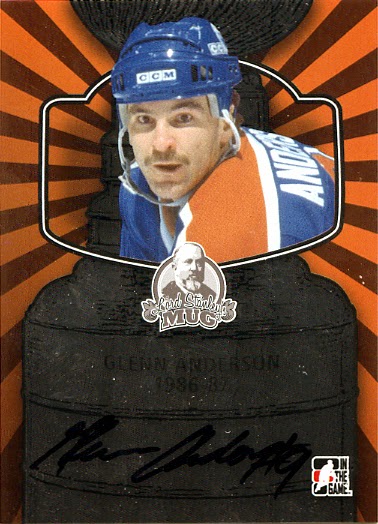 Now how much is Anderson a Hall Of Famer as opposed to how much did he benefit from being on such a stacked team?  It would have been interesting to see what a career he would have had if he played on a different team.

Sure, he had some contributing years with other teams later on in his career, but the reason why he's in the HOF is because of the Oilers dynasty.  C'est la vie.

This auto is so-so, but was basically a throw in on another deal...so it works for me. 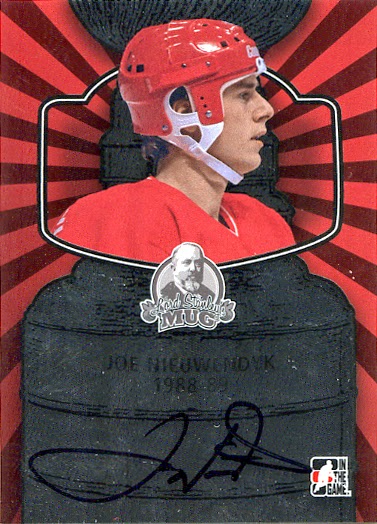 Fun Fact: I can spell Joe's last name without looking.  Thank you very much.

Nieuwendyk was such an exciting player when he burst onto the scene in the late 80's with Calgary.  A pair of 50-goal seasons will do that.  And while he won three Stanley Cups with three different teams, he will always be a Flame to me.

Joe's signature looks a little rushed, but I wanted him in a Calgary themed card and this was a great example of that. 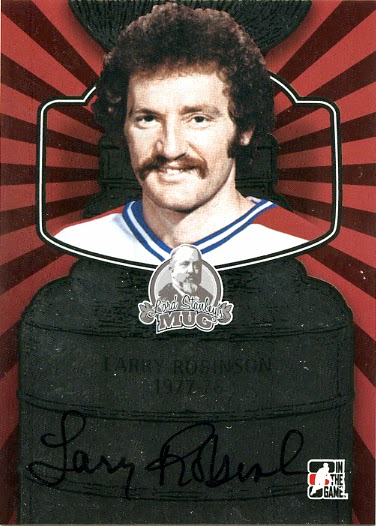 All of these Lord Stanley's Mug cards came from the same dealer.  He had a bunch of them on his table.  And when I was deciding which players to pick out I was going for some of the "cheaper" cards.  I was surprised to see Robinson in the mix.

I'd like to mix things up a little more with different designs and releases for autos in this project, but I won't complain about picking up these four from this set.

Larry's auto is one that is immediately recognizable.  A little sloppier than examples I've seen in the past, but still very strong in comparison to some others out there.

Robinson's resume speaks for itself.  He goes down as one of the best - period.  958 points over 20 seasons.  Always had steady numbers throughout.  PIMS, +/-, assists, TOI, you name it.

A two-time Norris trophy winner (and he would have won more if not for some guy named Orr), a ten-time All-Star and won six Cups with the Habs, Robinson led a dominant defence group that will never - NEVER be duplicated. 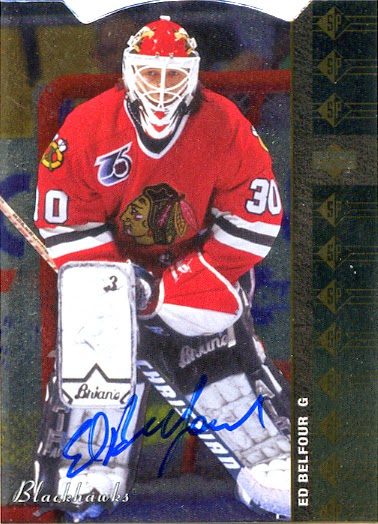 Eddie The Eagle has such a memorable goalie mask...but he was actually known for being a pretty darn solid goalie as well.

He rocketed on the scene in the late 80's and led a surpise Chicago team to the Stanley Cup Finals in 1992.  After that, the was the man.  He played nearly 20 years in the NHL with (let me remember the colors)...red, teal, green, blue and gold.

He has 484 wins which ranks him third all time.  That right there will get you in the Hall.  He's a two-time Vezina winner and is one of a select few goalies to win the Calder as rookie of the year (1991).

I really wanted a Chicago card for my Belfour auto and was happy to see this offering on the same table as the other sigs shown above.  It was nicely added into the deal made and I'm really happy to add it. 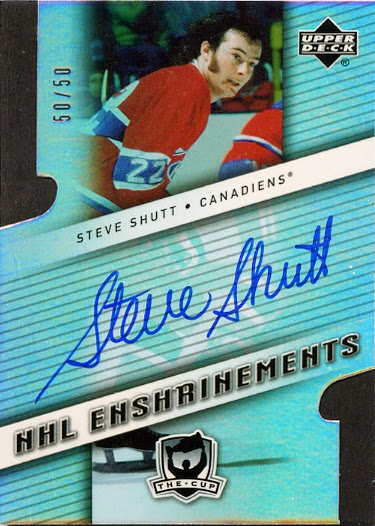 Hey, this card scanned not too bad.  And it's a good thing because it looks fantastic.  Those are some meaty pork chops!

Shutt, like Robinson, was a member of such an incredible dynasty team.  But his numbers aren't just as a result of playing with some incredible players.  I'd go out on a limb and say that Shutt may be one of the most underrated goal scorers of all time.

I think Shutt gets overlooked because of some guy named Lafleur, but number 22 definitely played an important role in his team's five Cup wins during his career.

Six more spectacular additions (crappy scans and all) and puts me close to the 60 card mark.  Well on my way.

Current Collection - 58 HOF Autos
Posted by bamlinden at 7:53 AM