I was back for more today at The Card Show.  What a weekend!!  I found even more HOF autos, a handful of Masked Men 6 cards (finally), yet another huge Linden for the pc and I couldn't resist going back for a double dip of Parkies.

When I saw the gorgeous batch of 51/52 Parkhurst cards sitting in a showcase yesterday, I knew that I wouldn't be leaving the show with just the three I picked up Saturday.  I knew I'd be going back.  The only question was - how many am I gonna get?

Well...the answer is three.  Not because I ran out of cash, but because I decided to go in a little different direction (stay tuned - I'll leave the best for last). 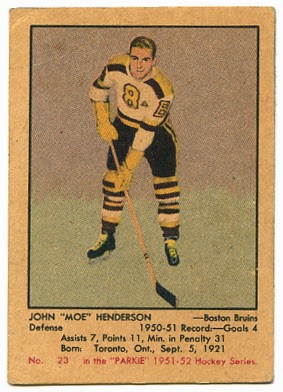 Henderson played his entire NHL career with the Boston Bruins and lasted eight years in the big show.  His numbers didn't astound, but he did  produce quite well as a player/coach for Hershey at the end of his career.

It's amazing to think that he was 6ft tall yet weighed only 180lbs.  He'd have no chance in today's game.

He does have a link to the Hockey Hall of Fame...he is the nephew of the Conacher brothers (Roy, Lionel and Charlie), all of whom have been inducted.

The card itself is a little soft on the corners, but mighty fine for the price I paid.  Good centering and quality detail....for a bland photo.  I like it. 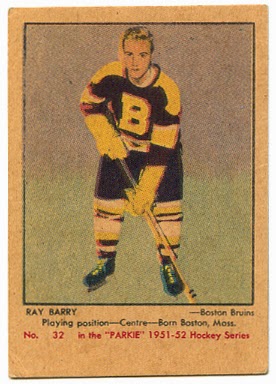 This card is interesting.  Ray Barry played all of 18 games in the NHL.  Yet Parkhurst decided that he was worthy of being included in the 105-card set.  I can only imagine some of the players who got snubbed only to see that Barry got his due.

After his quick cup of coffee in the pros, he played five seasons for the Calgary Stampeders of the WHL (not that WHL).  Neat.

The card again has some decent corners and centering (considering the price I paid) and really the only thing that sticks out for me is the "off" print.  You can really see the ghosting of the image layers on his skates.  Not sure if that is consistent on all his 51/52 Parkies, but I'm happy with it. 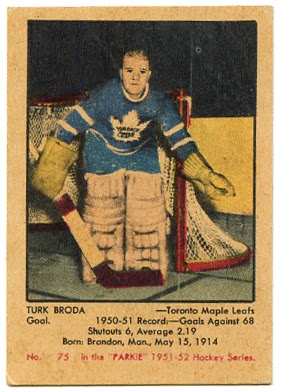 Alright, a name many of you older folk will recognize - FINALLY!!

I decided to go with this Broda as my final Parkie pickup as opposed to spending the money on three or four lesser known players.  The price was excellent and the card is equal to that (if not more).  I'd say this is the pinnacle card in the small collection so far.

Walter "Turk" Broda is a Hall of Fame goalie who played his entire career with the Toronto Maple Leafs.  He won five Stanley Cups, two Vezina trophies and is ranked #60 on The Hockey News' list of Top 100 Greatest Hockey Players.

He was in net for one of the greatest comebacks in Stanley Cup Finals history when his Leafs team were down 3 games to none to Detroit in 1942 and came back to win the Cup in 7 games.

A 300-game winner, he is without a doubt a huge name to add to this pc.

The card itself is very solid in my opinion.  Good corners (yes... a little soft, but more than acceptable for me).  Good color.  Good detail (although I don't know what's up with Turk's face...he looks a little cartoonish).  The back of the card is slightly dirty but again...it's all relative.

Three more fantastic additions to the Parkhurst project.  A little weekend splurge, but definitely worth it.