It's been a while since I have spent some time at the library doing some good old fashioned reading.  That was the goal tonight.

I was hoping to bring my nephew along since we recently picked up a new book for him to tackle (it's a tough go getting him to read on a regular basis....but he's normally game for a library trip).  Unfortunately, I was riding solo as he had a little bit of homework to tackle.

I took along a new book I was going to start, but found a title as I was browsing that made me call the ol' audible.  And it was short enough that I was able to flip through it from cover to cover in one sitting. 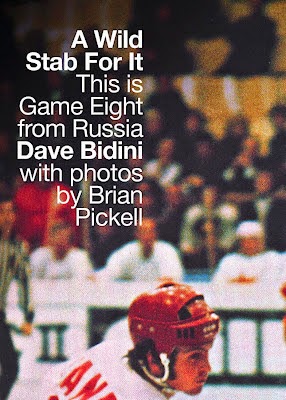 A Wild Stab For It: This Is Game Eight From Russia
Dave Bidini
109 pages

I like Dave Bidini.  He's a musician, writer, author and he's got an opinion.  I really enjoyed his book Keon And Me which I read back in 2012 when I pursued my '12 in 12' goal.  I've got a couple other titles by him that are sitting on the shelf......ready for me to read.  Ready.

For me to read.  At some point.

The story of what happened on the ice is very well documented but the angle this book takes is a collection of short, simple stories by different people Dave has talked to, and put into this collection.  Taking us through that final game on September 28, 1972.

While there were some interesting tidbits, I was a little disappointed by the overall tone of the book.  I was hoping for more of Bidini's voice in the read, but found it to be almost "notation-ish" (hey...another new word).  It felt like a collection of notes that were types up, organized and put into a book.  It lacked the character that I was anticipating.

Still, there were some interesting stories that I had never heard.  Like the night before the game when Ken Dryden was asleep and coach Harry Sinden was in the lobby of the hotel.  A reporter approached Harry and Sinden proceeded to ask if he could go check the bar next door to see if any of his players were still up (the coach not wanting to be seen as the bad guy).  A couple moments later, the reporter returned and said that if he were to wake up Dryden....they could have a team meeting.

Or the method of choosing the Player Of The Game (a lot different than today's instant Twitter feedback).  Just mail your choice to this PO Box address.  Snail mail....nice.

If you're a Canadian hockey fan, I think you'll enjoy this book.  It's got some good nuggets to it.  But it doesn't have that lasting effect some titles give.

Here's an interview with Dave Bidini just after the book's release back in 2012, the 40th Anniversary of the game.


As well, I've also put my two cents down on this title on the book site Goodreads, under my username bamlinden.  You can follow me there if you like (I have my other 12 titles read in my '12 in 12' journey as well as some other books I've read over the past couple years.
Posted by bamlinden at 12:05 AM