HHOF AUTOS - This Is Definitely A New Addition

It has been a mighty long time since I've had an actual new addition to the HHOF Auto project.  And yes....it was due to a lack of trying.

Since the return from my summer hiatus, I've been to a few trade nights and a couple of local shows but just never saw anything that really made me want to chase a trade. 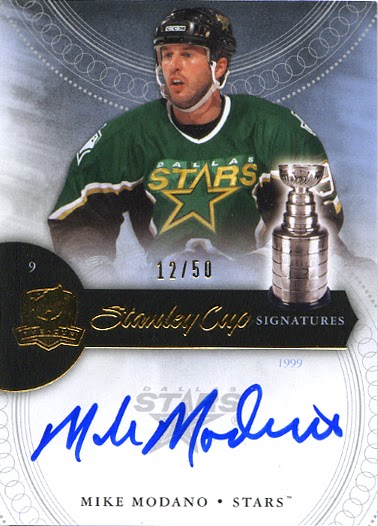 Like I said, this is truly a new addition.  As in last week I wasn't chasing this card.

Call me silly, but I feel like I shouldn't add to the wantlist until the actual Hall Of Fame ceremony has taken place.  Technically, they aren't a part of the Hall until then.

If I were to "work ahead", I could conceivably chase cards like Lidstrom, Brodeur, Crosby and Connor McDavid.  But I don't feel comfortable doing that.  It would feel like cheating and not give the respect to the Hall Of Fame project as a whole.

But Modano is in.....and now he's a part of my collection.  This Cup card is a perfect addition.  High-end card, beautiful signing space, great signature, solid photo (and with the team you'd want with him) and I made a fair trade for it.

What more can a guy say.  I hope all my future acquisitions for the pc are as smooth as the one tonight.