It's been a long while since I've shared a card here worthy of a Cardboard Photography post.  But when I saw this gem in a trade box at last week's trader night, I just had to pick it up.

It's simple, it's inexpensive, it's well thought out and it's very effective. 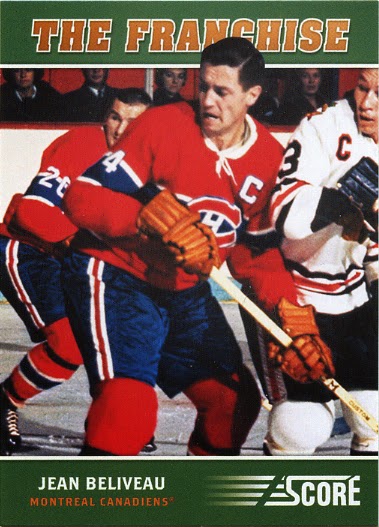 This is what an insert card from a low-end product should look like.  It's a total eye-catcher.  That vintage feel in the photo complimented by a simple top and bottom border (in a gorgeous green) with minimal gunk on the front.  Every single time that I see a card from this set laying out on a table or sitting in a trade box, I stop and admire.  That's what a hockey card should do.

Let's take a closer look at this photo.

Judging by the 'C' on Hawks' Pierre Pilote, this photo comes from the mid-60's.  While the focus is most definitely on Beliveau, one can't help to admire the "busy-ness" in the pic.

"Gentleman" Jean, Pilote and fresh cut John Ferguson are all clearly keeping an eye on the puck.  I love that there's a story in the photo and we are left to our imaginations as to what it might be.  The fans in the back are all sitting stoic in their (what seems to be mandatory) dark heavy coats, perfectly mannered in their attendance.

So what is the story in the card?  Well I found full 8x10 from where the card was cropped. 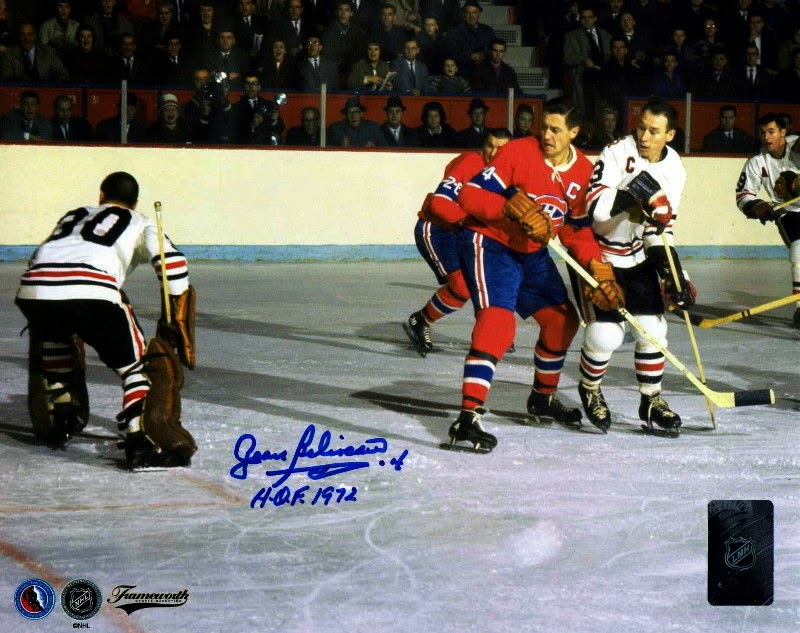 I was hoping for the puck to be trickling ever so close to the goal line.  Maybe a scramble or a desperate dive for possession....sadly no.  But this photo does reveal a little more than what's seen in the card.

Where are all the ads?  I miss the clean white boards.  Take a look at how tiny Denis DeJordy's pads are.  Love the ol' leather.  And the crowd....yup, they all got the memo.

While it might seem simple (or inconsequential) to some, I love how someone took the time to see this photo, identify that it would be a prime candidate for a hockey card pic and then go about finding the appropriate cropping and card layout.

Back to the card.

Speaking of leather....how about Beliveau's gloves.  Those are spectacular.  I could go for a pair of gamers for sure.  The tie-up sweaters that fit just right.  Minimal padding that don't make the players look like gladiator beasts (although Beliveau looks pretty intimidating even without the extra bulk).

And of course.....no helmets.  In the early 60's there were very few players who used head protection.  It's crazy to think about it now, but that's how they rolled.  Instantly identifiable, Beliveau just has the look and stature of a Montreal Canadiens captain.

One last note about the card layout.  Panini, who produced the Score brand for the few years they were in the hockey card business, has the presence of mind to make one simple design move that I think really finishes the card off nicely.

A quick comparison of what is and what could have been makes things crystal clear. 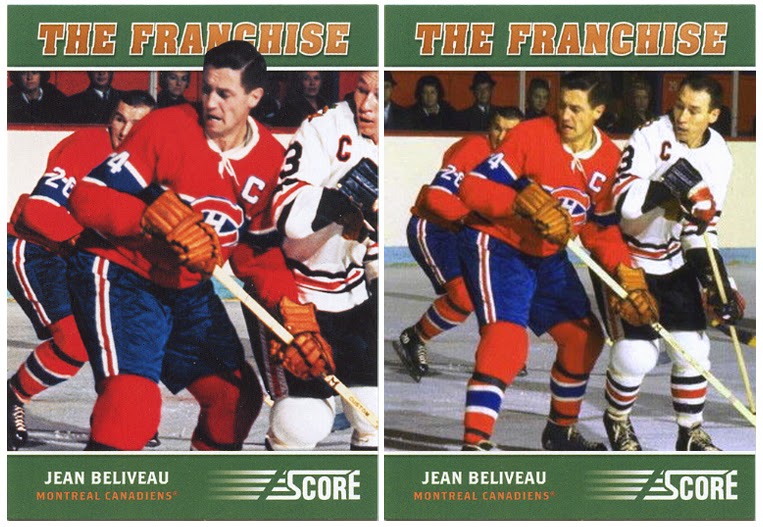 Simple and smart, but boy does it ever make a difference.

By just simply pushing in on the photo and letting Beliveau's head pop into the top banner area, the photo takes on a whole new context.

Don't get me wrong, the modified version of the right is still a nice looking card.  But less time is spent looking at Jean and more on the entire scene.  If the theme of the card was Montreal vs. Chicago....we'd have a winner.

But the name on the bottom says Jean Beliveau - and that's who you're looking at first and foremost.  That simple cutout tightens up the photo in the card just right.

A great looking card from an equally stunning set.  The next time you see one at the local show, take a moment appreciate it.
Posted by bamlinden at 3:47 PM