HHOF AUTOS - Yet Another Upgrade

Trade night last Thursday brought with it......a trade.  A trade for another hard-signed Hall of Fame autograph.  It's an upgrade....but a no-brainer in my opinion.

Back in March, I picked up a number of signatures is a wild trading frenzy.  Ok....no frenzy, how about a shuffle?  No?

Included in the mix was a very nice looking Milt Schmidt card.  It was (and still is) the earliest card in terms of player induction that I have in the collection.

The card comes from the very popular Panini Classics Signatures set, one that has a few other representations in my project.

So when I saw this "upgrade" (I use quotes only because both cards really are fantastic) I decided to trade for it.  I like having some variety in the design and product releases. 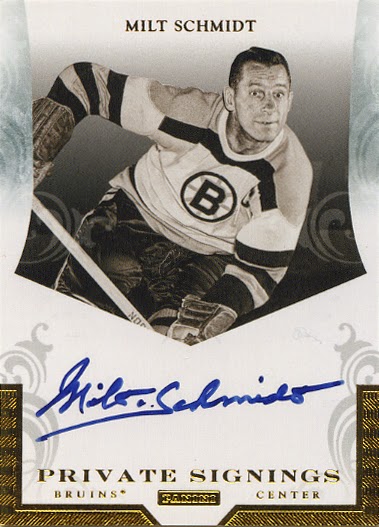 The signature is outstanding.  A definite eye-catcher.  Lots of white space for Milt to nicely scribe his name.  Not too shabby of a photo either although he does have that eye of "What are you doing here?".

The Private Signings multi-product release was a definite fave of mine when it came out.  Such a robust checklist, hard-signed and my guy has two cards in it.  A Montreal version and a Vancouver...both are SSP's.  I still need the Canucks version.

Anyways, back to Milt.  Awesome card...thrilled to add it to the collection.  Now I have another double.

Current Collection - 61 HOF Autos
Posted by bamlinden at 1:00 AM