LINDEN CARD(s) OF THE WEEK - The Colors Of Black Diamond

With a mighty exhale....I am finished my work for the 2014 season.  For the next three weeks I am going to be "king lounger".  Alright, maybe not. A little relaxing, a little organizing, some visiting and some looking ahead. It'll be a fun holiday season.


Last week was the final trade night of 2014.  I'm pretty fortunate that there are two monthly trade nights in my city that I can go to.  Both offer a great atmosphere and overall hobby enjoyment.  And every once in a while.....a Linden.

To wrap up the year, I managed to snag a pair - from Upper Deck's most recent product release, Black Diamond. You may have seen this card from a previous post.  It's been a while since Trev's graced the Black Diamond product and I really like this year's offering.

This double diamond base (which does not scan well) utilizes a nice photo from early in Linden's playing days.  I love the Cooper helmet.

But what really drew me to BD is the manageable chase.  Five cards in total, with a tough parallel/auto /10 and a 1/1.  Challenging...but not bank breaking. 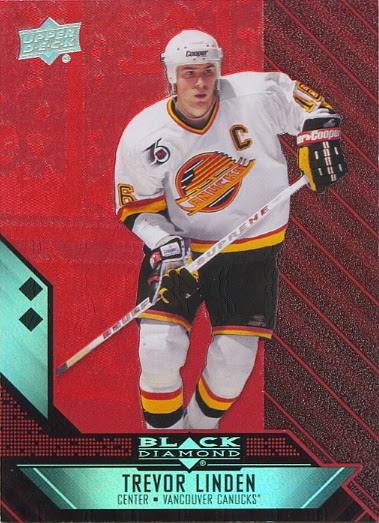 I grabbed this Ruby parallel /50 in a trade.  For some reason it scans much nicer than the regular base offering.  Funny story, I traded with the same guy a few weeks ago.  I had a Filip Forsberg auto and he had an Igor Larionov UD Anniversary buyback /25.  Easy trade.

I then go to the card show the following weekend and find the same Filip Forsberg card in the $5 bin.  I snag it in a heartbeat.

Fast forward to last week and he noticed the second Forsberg.  He asks if I'd be willing to trade for it - again.  I say sure (not knowing he had the Linden).  Sifting through his card, I was worried that I wouldn't find anything.  Then, in the last handful I find this gem.

I started ribbing him that he was holding out on me.  He knows I'm a Linden guy.  We chuckled and the trade was (once again) an easy one.


Earlier in the evening I made a trade for what be my favorite parallel in the set. 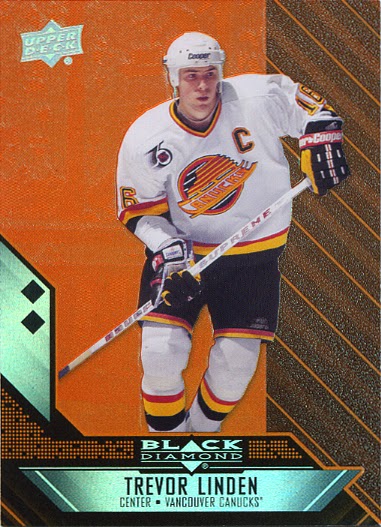 This orange offering comes from the bonus pack you get when buying a box.  And I really like the looks of 'em.  Especially with the vintage Canucks garb suited on the front.  It's not numbered, but it must be a tough pull considering you only get three cards in every box.

We were playing a couple rounds of Pack Wars and one of the guys pulled it.  He knew I was the guy for the trade.  He collected Avalanche cards and while it took a couple tries, we did finally come to an agreement.

I was able to get rid of a card that has literally been sitting in my trade box for the better part of a decade.  Can't go wrong with that.

So that leaves me with just the Emerald parallel/auto /10 and the 1/1.  I'm liking the progress on this one.
Posted by bamlinden at 6:03 PM