It's been a long while since I've given a card some face time strictly for the photography.  But when I saw this card pop up at trade night a couple days ago I knew I had a post.

Remember those Score Net Cam cards from a few years ago?  The set that takes low angle butt shots of goalies and gives them the moniker of "insert".  The set that reminded me of my old Atari video game system?  Super cool for about two minutes....then I find myself asking "Why am I even looking at this?".  The set that I used to build....then abandoned, and never moved from that day forward (seriously...I haven't touched 'em).

Well it seems that Fleer Ultra needed an insert set and pulled a rabbit out of the ol' hat. 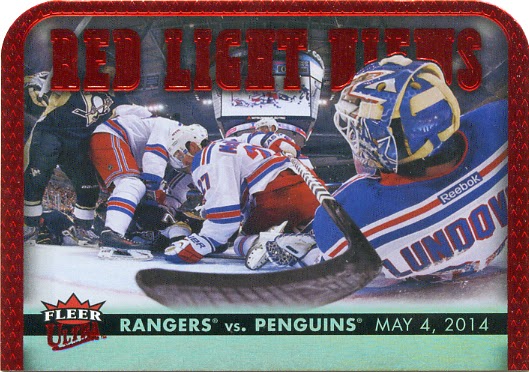 Yeah, that's right.  A celebration of pucks going into the net (after all, that's what the red light is for).

I'll be honest, when I first saw this card I thought "Cool".  Then I slapped myself for thinking such a thing.

But I still traded for it...so let's take a closer look at this bugger.

First, you have chaos.  How many guys do you count in the crease?  Six?  Seven?  And where exactly is the puck?  According to the set name...it could be in the net.  And I love the stick just stealing centre stage.

One of my biggest beefs is that the Red Light Views title is plastered across the top of the card...impeding my view of both the unknown Penguins player and the video screen at the top (which has an alternate view of the play).

It's a shame since there's ample room at the bottom of the card if you swap text with the team names and date.  But what do I know.

I do like that we get to see King Henrik's backplate (as unexciting as it is). And I do enjoy the numerous thoughts D-man Ryan McDonagh must be having.  "Where's the puck?", "Where's my contact?", "Those are nice skates", "I'm making imaginary sand castles in the ice".  Hours of fun.

Overall though, it is an interesting photo - just not a unique or exciting execution of a hockey card.

I think it would have been better if the insert set was called "Gongshow".

Oh wait.....that idea has already been taken.
Posted by bamlinden at 2:24 AM