When I was a kid going to school, that used to be the comeback of all comebacks when we couldn't come up with anything clever to say.

I don't know why that has stuck with me all these years, but I snicker when I hear someone say it as an honest compliment, and it was the first thing I thought of when I saw my latest Linden addition. 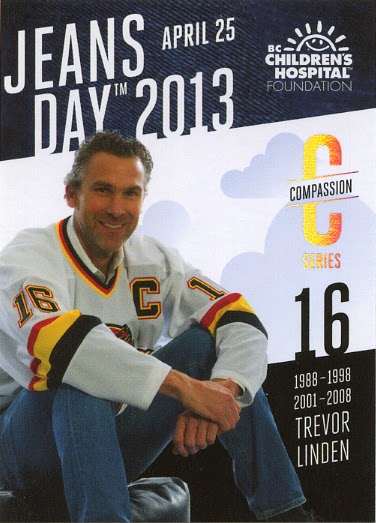 After waiting a couple years to finally own a copy of this local release, I was able to trade for the complete 5-card set.  I already owned the 05/06 postcard, the 06/07 release and the 07/08 to complete the trifecta of his "playing days" contributions.

This 12/13 card is part of a set that includes past Canuck Captains.  Orland Kurtenbach, Stan Smyl and Henrik Sedin make up the quartet, each wearing an appropriate-era jersey.  The fifth card is of mascots Fin and Sunny Bear (Canucks and BC Children's Hospital respectively).

What really caught me off guard was the size of the card.  The previous three Linden Jeans Day cards were all oversized (postcard-type) and I was fully expecting this 2013 model to be the same.  But when I saw the envelope I knew that wasn't the case (or the guy folded them up nicely).

Rgardless of the card size, I really like the looks of this one.  The "C" on the right hand side is a silver foil (that just so happened to scan in as a yellow and orange....cool).  It's a simple design, but the color breakdown really compliments.

A great mailday to be sure.


But that's not all the Linden's to show this post. 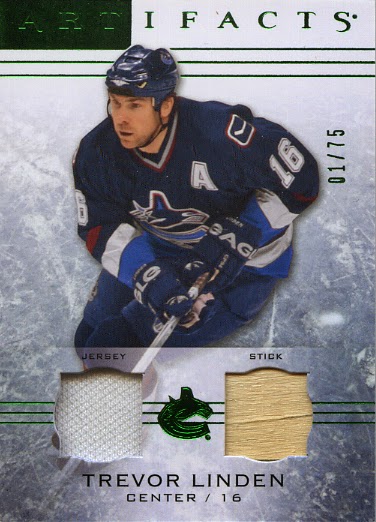 This was a card I traded for (along with a pair of HHOF autos) at last week's trade night.  I knew this Linden was in his trade box, but I didn't have any Wings cards to offer up at the time.  Last week I went prepared though and the deal was quick and easy.

At 75 copies, this is one of the most common cards left on my 14/15 Artifacts quest.  I'm about halfway done and the road is going to get bumpier the further I go. 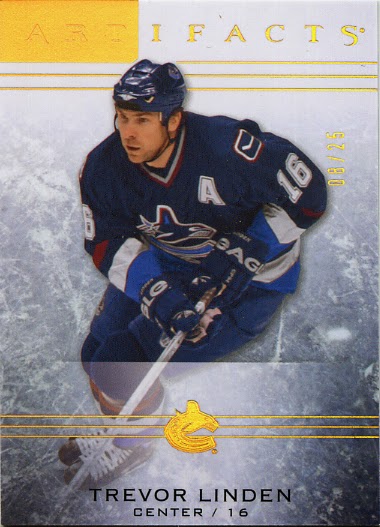 Thankfully, this Gold Spectrum card popped up on ebay at a time where I think a lot of people just weren't interested in chasing it.  To get it for less than what I've paid for /25's from other years makes me think two things.  First, it's January - fewer buyers.  Second, the Canadian dollar is horrible right now and fewer people are buying from the US.

This card came from a Canadian seller on ebay, but when I view cards it's in US dollars.  I'm starting to get used to figuring out Linden values using that guide (which makes buying locally....and in CDN dollars all the more better).

A good week overall for the Linden collection and I know there's going to be more to come.
Posted by bamlinden at 10:14 PM