I was excited to see some fresh monster boxes out at trade night last week.  Especially when one of them said "Autographs".

The first thing that shot to my mind - Hall Of Fame project.

And while I didn't land the 10-15 cards I was hoping to (hey...a guy can dream), I did pick up a perfect piece for the project. 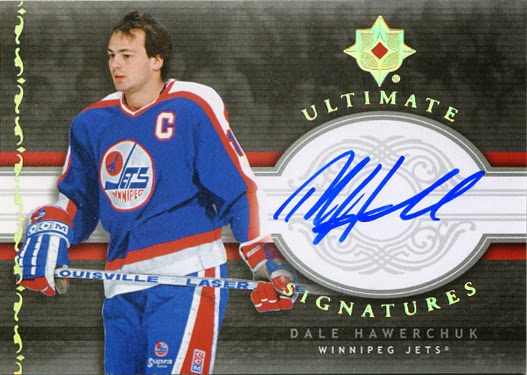 I feel like Dale has had a similar impact in the hobby that my guy Linden has had since his retirement.  He's in lots of products and he gets some decent interest in his cards.

This piece comes from 2006/07 Ultimate  and is a great design.  I have a Cheevers and a Perreault from this set as well and all three are super-sharp adds.

And while Hawerchuk doesn't have quite the signature that the other HOFers have, I can appreciate it.  I see an 'H' in there.

Check out the stick Dale has.  I don't recall the Laser when I was a kid, but it does look sweet.  Heck, the whole blue with red and white trim is a total 80's flashback.  I would have loved an action shot though (like the Cheevers and Perreault).

Overall though, it's a great card to add.  And it puts me one step closer to the magic 100 card mark.