WALLET CARD - A Two Base Hit

It was my first outing after making the call to start my new player collection.

Oscar Gamble probably isn't going to be sitting in too many trade boxes here in Western Canada, but that doesn't mean I won't be searching.  And boy does it ever help when people take a moment to sift for me.

In fact, I was the fortunate recipient of a pair of new #WalletCard additions, brothers, project wants. 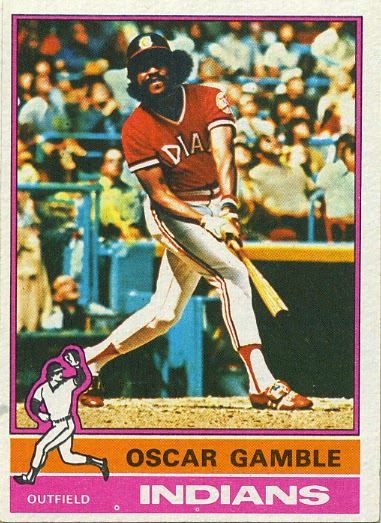 I like to call this one the "half-ro".  There is just so much vintage cool going on in this photo.  Old school stockings, elastic waistband, killer Indians logo, the crowd, the colors, the printspot and of course....the hair.  Fantastic.

This card even has the gloss still fresh on it.  A little off-center, but it's the 70's....what do you expect?  Great card. 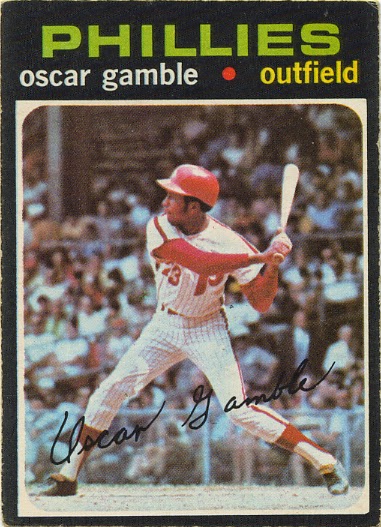 This is an earlier offering in the Gamble card arc.  In fact, it's the first Oscar Gamble card where he's flying solo.  He's the lucky recipient of a rookie card that shares the spotlight with two other prospects.

So let's take a closer look at this piece of cardboard.  I see sideburns and I'm super curious to know if that batting helmet is ear flappless (I bet it is).  Just a great photo that bleed 70's....and I don't really know why.

As for the card design, I'd hate to build this set.  Talk about condition sensitive.  This one is solid, but definitely shows its age.  But then again...so do I.  We're both over 40.

The centering on this card is really nice.  And I definitely put card centering over edge sharpness.  Getting both is a bonus.  The fonts used on the top of the card are simple, basic, boring, expected.  And I really like the facsimile signature.  Reminds me of the 1982 set I built as a kid.

The card back is where I noticed that I have an OPC version.....there's some Francais if you may.

Overall, these cards are a super start to what will surely be a fun collecting project.
Posted by bamlinden at 5:17 PM