Just a quick observation before I get started with my show & tell post.

I saw the new Linden cards added to Upper Deck Ice yesterday.  And I like 'em.  It's a nice refreshing change to the same ol', same ol' story I've been hit with of late.

Three variations on the Glacial Graphs insert.  He's had clear acetate signature cards in the past but I think these offerings are the best yet. 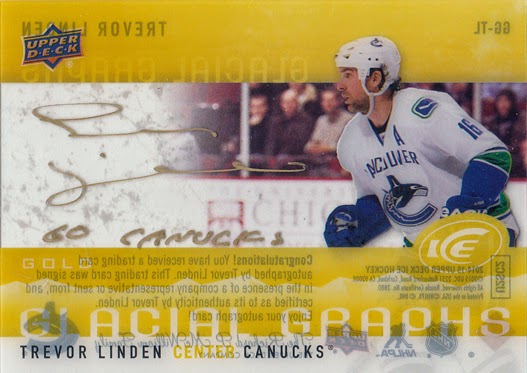 This is not my card.  I borrowed the scan off of ebay.  And it shows the yellow variation which has the inscription "Go Canucks" added.  It's not numbered (but you'd think it was based on some of the asking prices).

I'm looking forward to tracking this one down.

The regular version is the more traditional blue-themed card.  I've seen examples of other players and can imaging the Linden no prob.  I'm hoping to trade for it or pick it locally this weekend at the monthly card show. 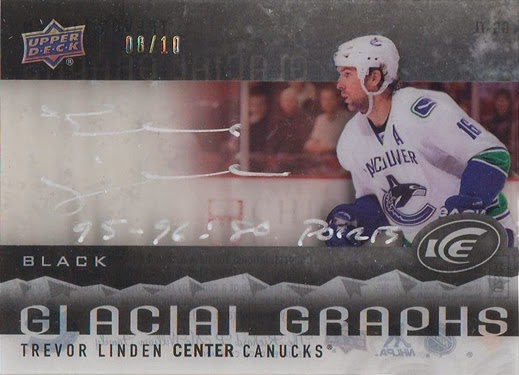 As nice as these cards look on my computer, I bet the scans do them no justice at all.

I'm looking forward to the chase.

Now....we return you to your regularly scheduled program.


Recently, I picked up a few less expensive Linden cards on ebay.  I had been patient with some and was rewarded with better than market prices and in one instance was able to scratch off a fairly limited card for less than $10. 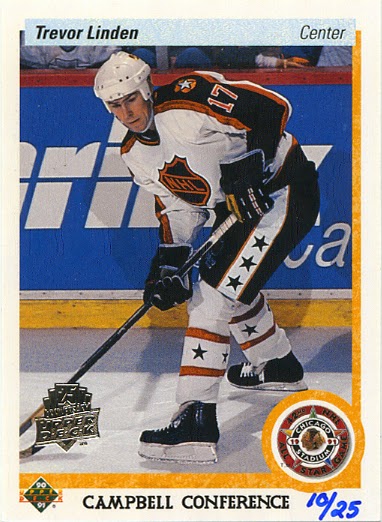 I'm a little more tolerant about this one because it's got a print run of 25 (as opposed to a crazy limited 1 or 3) and the price on it was a lot more realistic.

Actually, now that I think about it, the markup on this card is was more insane than any ITG offering.  To think that the above card back in the early 90's would fetch maybe....MAYBE 25 cents, that's quite the inflation in buyback pricing.

Anyways, this card came from Series II of the flagship product.  There was also a Linden buyback tossed in Series I.  And it showed up in my mailbox today. 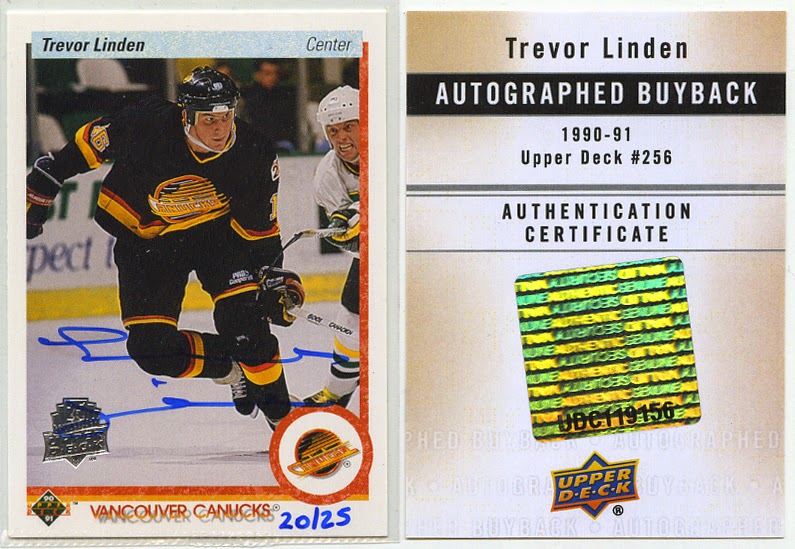 The big difference (obviously) is the signature.

I had passed on the first 4 or 5 of these that popped up on the secondary market.  The prices were pushing $100.  I don't know if there is any card out there numbered to 25 that would make me fire off that amount of cash...at least not anymore.

But patience paid off again and I was able to get this copy for a price I was happy with.

Of course, the story doesn't end there.  It never does.

Bubble mailer looked fine when I pulled it out of the mailbox.  Opened it up and found a flimsy toploader.....and the card peeking halfway out of it.

Absolutely zero extra protection on the card.  No decoys taped to the toploader to give the card a little more rigidity, no "throw me a bone" piece of tape to secure the top of the toploader, nothing.

Me being me, I messaged the seller to ask if this was standard for shipping (on a non-$5 card).  His answer - YUP.

But because the card I received wasn't damaged, I didn't really feel it was fair to slap him with a neutral or negative.  Instead, I gave him his positive feedback - and spelled it out in the notes.  Poorly protected card.

Could've been worse I guess.  I'm just happy to add this one to the pc.

And I've got a few final tricks up my sleeve before I go on my summer hiatus.  So stay tuned.
Posted by bamlinden at 12:40 AM