LINDEN CARD OF THE WEEK - Quite A Gift

It's been an exciting past few hours for me.  I bought a card....on ebay.  It's a rare thing - unlike years past where I binged on new Linden offerings.  These days I take a cool, collected and precise approach when it comes to what I chase and pass up on the interwebs.

I paid a stupid amount for the card, but it was my white whale so I was ready for it.  I can't wait to show it off in the near future.

But that was only part of the excitement.  I got mail.

Haven't received too many bubble envelopes so far in 2016.  I'm good with that.  It means that I'm being very particular with what I'm picking up.  Economy, economy, blah, blah, blah.

This card however didn't come with a price tag.  Instead, it came with some kind words from the sender.  Warm fuzzies for everyone. 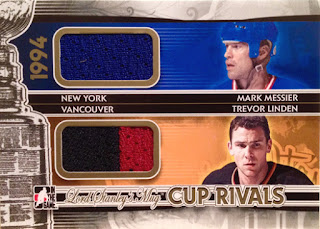 Even Mark Messier can't ruin this for me.

I've been a player collector for nearly 20 years now.  And over that time I feel as though I've amassed a pretty solid collection - one that I'm proud of.  I still like "the hunt" for the elusive cards that I need and when I can snag one, I rarely have any buyer's remorse.  It's a good thing.

But during those two decades I've found other hobbyists who have similar passions and dedication to their collections.  Some of them are fellow Linden collectors, some of them chase journeymen players and others go after big name stars.

I learned of a "hardcore" Sedin collector a number of years ago.  Actually, I don't like using the word hardcore because it just has a harshness to it.  He's a person who enjoys the chase as much (if not more) as I do and he's been very forthcoming with sharing his stories and successes.  He's also been very selfless with giving to other hobbyists.

When I've seen these acts of kindness it inspires me to reinforce the enjoyment-side of hockey card collecting.  It motivates me to keep a positive mindset and makes me want to share in good fortunes.

This dual jersey card comes from a multi-box break in which he was looking for cards to fill in some slots in his master Lord Stanley's Mug project.  As soon as I saw the Linden/Messier card I knew that it was the gold version....which was still on my wantlist.  I quickly asked what the pricetag was on the card and if we could work out a trade or sale.

Without hesitation, he let me know that the card would be coming my way with no need for a return item.  I just shook my head and smiled.  It'd do no good trying to talk him out of it.

Instead, I'll continue keeping an eye out for anything he might need, and I'll be sure to "pay it forward".  There are a lot of good people in this hobby world and that's always at the forefront of my mind.

So a very hearty thank you to Dave for the great card.  I'm not cringing nearly as much over the Linden sharing this piece of cardboard with Messier.....for today at least.

Thanks again!
Posted by bamlinden at 9:12 PM