STASHED IN THE CLOSET - My "Go To"

So I was doing some closet organizing this afternoon.  Linden cards specifically.  Made me feel productive today while I was watching the Flames surprise the Pittsburgh Penguins.

I was in the mood to tidy up the card closet because it was a pretty good last week or so hobby-wise.

I picked up four nice Parkies for my slow-build "bucket list" set.  I discovered my white whale (almost 10 years going) and am hoping to spear it soon.......not going to jinx it by saying anything more.  I talked with a fellow Linden collector for over an hour, reminiscing about old cards, rare oddball stuff and just the love of the hobby (and he's sending me a special package....stay tuned).  And I feel a sense of accomplishment for successfully transferring my Master Trevor Linden checklist over to excel (it had been a word document for years) complete with print runs and a list of who has what 1/1's.  I've got over 1900 cards documented on the list so it was a huge accomplishment.  Not to brag, but I feel like it could be the most complete Linden checklist in existence.

So I cleaned for a while, put cards where they should go, sifted through some cards I haven't looked at in a while and then saw my trusty "go to" for card shows.  I had just fancied it up after the last show...so I decided to take some photos.

Hey, if I can take pics of my trashcan, I can snap a few shots of my card box. 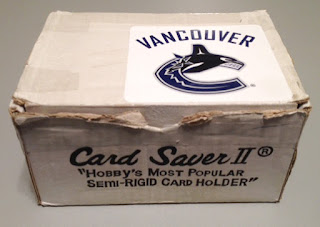 Say hello to my little friend.

This is the sidekick I take with me when I go to the local card shows.  I prefer it to the bigger shoebox size holders and to be honest - I don't see anyone else carting one of these around.  I think it has character.

I picked this up about 15 years ago when I bought a bunch of early 70's vintage from the monthly show.  The guy who ran it at the time (the guy I bought the cards from) put them in this box, since I didn't have anything to carry them in.  Little did I know at the time that it would be the only thing left of that transaction.

The Card Saver II is indeed the "Hobby's most popular semi-rigid card holder".  You remember those flimsy plastic holders?  Thin, kind of in between a penny sleeve and a top loader?  While I don't hardly use the actual card savers, this box is always on standby before a show.

When I first obtained it, it wasn't quite as beat up as it is now, but it had been well used.  I liked that it opened more like a box as opposed to the flaps that fold inside of other small cardboard carriers.

I slapped the Vancouver sticker on soon after to announce that this was indeed my card box. 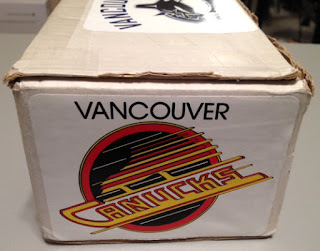 Last month at the local show, there was a guy selling some sweet oddball items.  I'll have to share the posters I picked up with you soon.  They were a steal.

But this skate logo sticker was a total find.  It has that thicker, plastic feel to it and fits perfectly on the side of my card box.  It was meant to be. 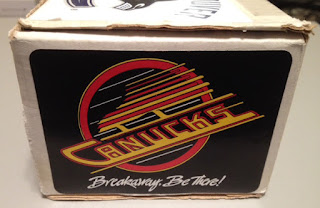 Second verse...same as the first.

He had multiple Vancouver stickers for sale that day.  This one was the coolest.

Character in a card box is rare, so I really like that this beat up piece of cardboard is mine. 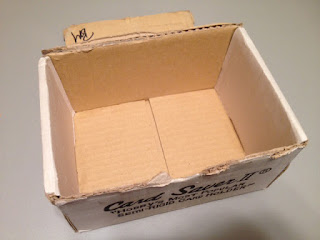 As I mentioned, I don't like taking a huge trade box with me to the monthly show.  I really don't need to be lugging around that much stuff.  I rarely pick up more than a dozen or so cards.  This is more than enough space for me.

Did I mention that this thing is beat to heck.  Sweet. 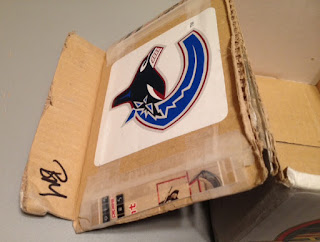 The lid has almost fallen off twice - and is flimsy as crap and used to fold in on itself.  I used a decoy card to reinforce the lid and a little packing tape should hold the hinge for a while.

My initials make it clear that this box does not belong to you. 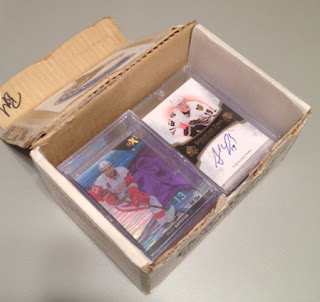 This box comfortably fits 50-60 traders and I can keep a small clear case for any singles that are unprotected.  I can fit toploaders and one-touches just fine.  And when it was all the rage....a folded up wantlist was housed in back.


So what do you lug your cards in at the monthly show?  Do you even take a trade box or carry case?  And most importanly...have I stretched things too far with regards to content on my blog?

I really need to fix my scanner.
Posted by bamlinden at 9:14 PM