One of the things I like to do at the card shows is dig.  Dig through boxes upon boxes looking for that hidden gem.  Safe to say...I'm a sucker for a good deal.

And it's paid off handsomely in the past.  Cards in a dollar box that I've been able to parlay into $2 each (yeah....I call that handsome).

But seriously, I'm not that good at sniffing out the killer deals and making a fortune on flipping.  In fact, I think I'm pretty bad at it.  I don't think I have the killer instinct and I definitely don't have the pocketbook to really build a robust inventory of tradebait.

But every once in a while I come home from a show thinking "I got one heck of a deal here".  And with this card - I think I done did good. 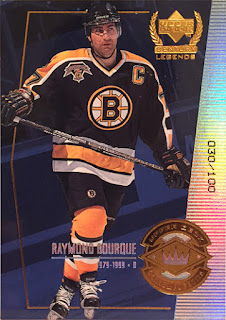 Years ago I put together this set.  It mainly consisted of the top 50 players of the past century in the NHL - ranked.  I really liked the looks of the set and it's one of the few completed sets I regret parting with.

These parallels were, and still are, a hot commodity and are really tough to find.  And while this Ray Bourque card doesn't come from the top 50 list (he ranked 16th at the time the list was released) but rather the Contemporaries subset, it doesn't make this find any less special.

A quick perusal of ebay completed sales shows these parallels go for anywhere between $12-25us for the more "common" guys all the way up to $75us for the Gretzky.

I picked this Bourque up for five bucks....Canadian.

There is one benefit to collecting in Canada these days....the ability to "buy low" in Canadian funds and possibly "sell higher" in US dollars.

And while I'll just likely shove this in my trade box, I do feel like I'll be able to at very least break even with this pickup.

Like I said....killer instinct.
Posted by bamlinden at 8:57 PM