It was trade night tonight at one of the local card shops and that means a nice relaxing night of hockey on the television, a couple rounds of pack wars, the possibility of me caving (not tonight though) and a little bit of vintage.

Yes, it is a very rare sight but it does happen on occasion.  And tonight I was lucky enough to add four new cards to the slowly growing 51/52 Parkhurst project.

I was staring down the boxes of cards on the shelf, trying to figure out what I wanted to try my hand at.  There was a good deal on last year's Black Diamond, but decided against it.  New baseball???  No, not really feeling it.  Then, out of the blue, fellow blogger Captain Canuck spots some singles in the hand of one of the shop staff and instantly knew where they needed to go.  He grabbed them and sent them my way.

Upon first glance I knew that they were exactly the right cards I was looking for.  Something for one of my projects and the condition was bang on (or close enough as it seems).

I'm not going for a high-grade quality set when it comes to this iconic card release.  Rounded corners and the odd crease or stain will do just fine.  At the end of the day it's the gut feeling to say "yes" or "no" and in this instance I said yes to all four. 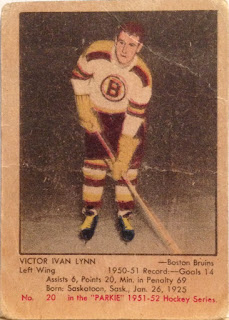 Out of the four cards I picked up, this would be the worst of them in terms of condition.  A couple creases and some fluffy edges.  And although the price was just a little more than I was thinking of going for, I thought "why not".  The odds of finding four Parkies at trade night is rare enough, being able to see the cards first hand and not have to pay for shipping or anything - you bet, and paying in Canadian funds...not a bad deal at the end of the day.

Now, for the longtime, uber-fans of my blog, you may remember that I have mentioned Vic Lynn in a past post.  And if you can remember why...well you have some pretty spectacular memory recall.

For those of you who don't know....you can check it out here. 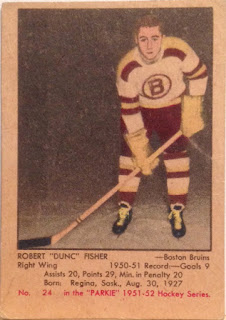 Dunc has the best corners out of the four cards I picked up and just a small crease on the back.  There's a little scratch/score in the bottom left corner - you can't even see it in the scan....so I'm not really concerned about it myself.

Not much more to say about Fisher...this is his rookie card (as is the Lynn and most of the cards in the set - in fact, I think the Turk Broda is the only non-rc in the 105 card set).

It was one of the two cards in this lot that I really had my eye on and the price was more than fair.

Dunc seemed to have a more prolific career in the minors with the Hershey Bears than he did with the three NHL teams he suited up for in his 275 games with three Original Six teams. 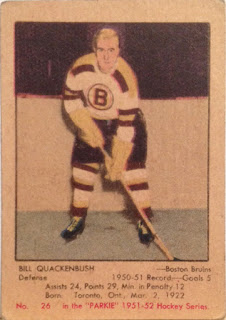 This would be considered the top card in the lot.  It's the only one listed in the monthly Beckett guide and commands more than the other three cards I picked up.  It's no surprise that this piece of cardboard ended up being the most expensive of the lot....but (and I sound like a broken record) the price was fair.

A very nice condition card (in comparison to most of the others in my small, but growing, set) and it's even fairly centered - bonus.

Bill was the first defenceman ever to win the Lady Byng trophy, played in eight straight All-Star games beginning in 1947 and was elected to the Hockey Hall of Fame in 1976 (no, I do not have his autograph yet).

A great pickup if I do say so myself. 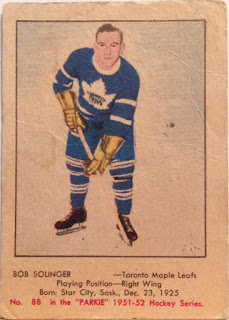 Last but not least (well, maybe least) is the only non-Bruins card in my pickup.

Bob was on the fence coming home with me.  He's got a bit of a stain on both the front and back and a little creasing, but if I'm gonna grab three of the four, I might as well bring the whole gang home.

Solinger played just 99 games in the NHL but nearly 1000 in the AHL and WHL with teams like the Pittsburgh Hornets, Edmonton Flyers, San Francisco Seals and the ever popular Los Angeles Blades.  He won the Calder Cup a record five times and was the first person to win the Dudley "Red" Garrett Memorial Award as Rookie of the Year in the American Hockey League.

So while some of these names (or all of them) might not be familiar in the history of hockey, they all have their own unique story.

And the fact that I was able to snag all of their rookie cards tonight at the monthly trade night was indeed rare.