RAISE THE CUP - Mike Pushed Me Over The Edge

It's been a busy month for me in the world of sports cards.  In addition to some great Linden (and Parkhurst) additions, I picked up some cool oddball items (which I will show off this weekend), I won a round of pack wars at the monthly trade night (nothing too spectacular....but better than a kick in the hoo-ha) and I traded for a card that might be the straw that breaks the back and launches me into another side project. 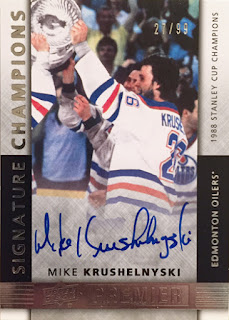 By no means is this a "killer pickup", but the fact that I've been eyeballing this set for a while says something.

Those of you who follow my blog know that I like to pick up cards that have players hoisting the Stanley Cup over their head.  I've got a good 150 or so cards now and I think they look pretty cool as a set.

Over the past few years there have been numerous insert sets and subsets that utilize these great moments and form a Stanley Cup memory-type subject.  The problem is that most of the time the cards are just missing a little something.  Not diverse enough of a checklist, one or two photos that don't quite fit the theme or just not an interesting design.

This Signature Champions set from UD Premier is really quite stunning.  Some solid player selections (Krushelnyski aside), hard-signed autographs and good photos.

So the question is - Why haven't I been building this set?

As you can see it's a pretty solid list.  Sure, there are some "meh" cards (Krushelnyski) but the big guys more than make up for it.

There are some names in there that would be cool to chase as I've never tried to track down autos of these guys (Gretzky, Lemieux, Roy).  But....

That's the only thing that has me hesitating.

I feel pretty comfortable with about 18-20 of them.  And as I typed that out.....it makes me feel pretty good about the whole thing.

In fact, I really like the idea of building this set now.  I think it would be a fantastic project - which falls right into the pocket of what I like to chase - and I don't feel like I would be breaking the bank.  After all....as I always say...

So with that, I am officially starting it up.  Look for more "Signature Champions" posts in the future.
Posted by bamlinden at 12:42 AM