SIGNATURE CHAMPIONS - Off To A Quick Start

Maybe it's the excitement of starting a new project or maybe the lack of Linden pickups locally of late, but the newest challenge I've set for myself started with a bang at the monthly card show today.

The Signature Champions set inserted into the 2014/15 UD Premier product caught my eye immediately and earlier in the week I decided to pull the trigger and walk around with an official wantlist.

While it's not a huge list in terms of numbers (24 cards) it is a giant in the sense that there are a few big names I'm going to have to try and track down.

But I'll worry about that later.....much later.

In the meantime, let's take a look at the newest cards to be added to the set. 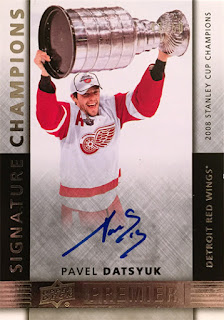 I had sifted through a number of boxes on one particular table and had already seen a couple cards from this set (Dustin Brown and Grant Fuhr) but decided to pass on them as I thought maybe the price wasn't quite right.  When I came upon this Datsyuk.....I didn't hesitate.

While Pavel's strength in the hobby market isn't too huge, a nice hard signed offering - on a card with him hoisting the Stanley Cup - and numbered to just 50 copies makes this a definite keeper. 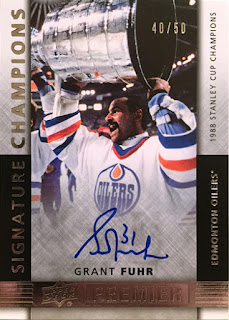 I mentioned that I passed on a Grant Fuhr earlier in the day.  Well, a quick pek at completed sales on ebay made me hustle back to grab this copy as well.

I could never decide if Fuhr was the beneficiary of playing on spectacular Oiler teams or if he was just that good.  The debate continues to this day. 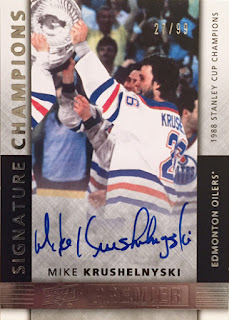 You've already seen this one, but I thought I'd do an official write-up of it. 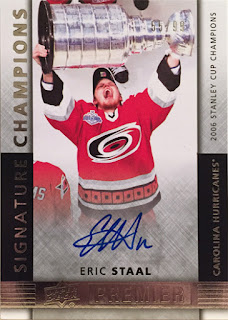 This was the first card I picked for this set.  I grabbed it months ago at the local show.  It was five bucks and I figured why not.  Now, it looks like a great find since I'm building the set.

I think this might go down as my favourite photo of a guy raising the Cup.  Awesome pic.

I need a few more pickups like this one so it can offset the beasts that will come knocking down the road (Gretzky).

I still really like the looks of this set.  Let's see how long it takes me (and no...that's not me telling you I will be quickly trying to finish).  Should be fun.