LINDEN CARD OF THE WEEK - I Got A New Scanner

Let me just start by saying life is just that much more back to normal.  My computer issues are now completely in the past.  My trusty desktop system that has served me well for a great number of years has officially been retired.  A new Mac Mini and a new scanner later and I can show off some of my recent hobby pickups with way more ease (I'm not much of a cameraphone guy).

So what has come in the mail lately?  Well I've got a few new #WalletCard pickups (gotta love Oscar) and a bunch of goalie mask pickups...set killers too.  I caved and picked up a few cards via COMC (thanks Kevin for helping me with the whole thing).

Lastly, in addition to a few Linden cards here and there, I found this little big gem on eBay a few weeks back.  It's really caught my eye...and I'd never seen one before, so I have no idea if it's rare or not. 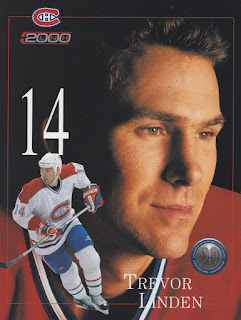 It looks to be a handout from a game in 2000 (the logo in the top left is a dead giveaway).  I really like that logo.  It's a great piece from Trev's short stay with the Habs.  Based on the other logo in the bottom right, it looks as if the Canadiens were celebrating 90 years as well.

It's a thicker paper stock but not like a trading card thickness.  Has a really nice glossy finish so it doesn't look or feel cheap.  And it's good quality photos....if you consider dreamy headshots as "quality".

What the heck did they say to Linden before they took that photo?

When I saw this pop up on eBay there was only a scan of the front so I did a little research and some question-asking.  Note to all of you....ask questions.  You tend to get answers that way.  I wanted to know if the back was blank or not. 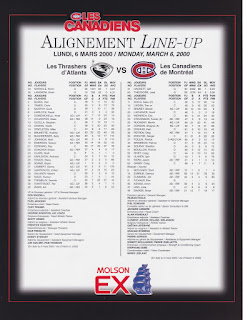 Nope.  There's lots of stuff on the back.

The Atlanta Thrashers definitely do not have a french sounding name, but there are a few guys on the team that ring well in the language.  A close look at the roster for Montreal and I can't help but notice one name on the injured list...Trent McCleary.

This line-up card was issued just over a month after that freak injury which ended his career.  I remember being at work (news editor) and seeing the footage come in on the feeds.  Scary stuff blocking a shot with your throat.

Sorry about that.....back to the actual item on hand.

I've always struggled with these more "oddball" items in terms of what to chase and what to pass on.  I don't go after game-used jerseys or sticks or any other equipment.  But every once in a while I'll see a poster or figurine that just says "Buy me".  If the price is right....I'll usually listen to that little voice in my head.

And the price was right on this oversized card.  It looks great and I was really happy when I opened up the envelope.  I also like that I can add some non-Canucks Linden stuff to the closet.  Gotta celebrate those days too.