LINDEN CARD OF THE WEEK - Program Of Excellence

There have been just a handful of cards to pass my way so far this year that have really made me stop and do a double take.  My white whale from a couple months ago would most definitely be one of them.

But last month I came across a card that honestly made me completely stop everything and go into full research mode.

After collecting a player for so many years and really gaining a knowledge of pretty much all of the cards he has out there - especially the ones I still need, rarely am I stumped when I see a new item pop up on the open market.  Most of the time it "Oh....there it is".

Not this time though.

When you look at the card you may think "What's the big deal?"  Well, let me explain. 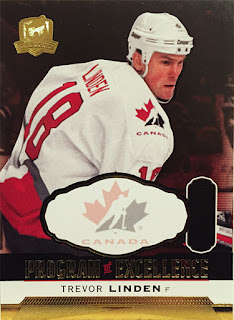 This Linden card comes from last season's high-end juggernaut The Cup.  It's a beast should Linden have a few cards in the mix.  It's been a decent blend of "That'll never end up in my collection" and "Hey, I got that one for a good price."  I've tried to keep things fun with it and for the most part - it has been.

In the most recent release, there was a simple (if you can call it that) base card, a gold parallel /5, the obvious 1/1 black parallel, some printing plates and a juicy shield card (which I almost landed).  There was also a nice Program of Excellence triple auto card of Linden with Joe Sakic and Curtis Joseph all wearing Team Canada garb.  It was a redemption card and only 3 copies were made.  I have yet to see one actually redeemed.

So where does this individual Program of Excellence card come in?  Good question.

According to the official Cup checklist, there is no Trevor Linden individual card released.  But as you can plainly see...they had one mocked up and ready to go.

This is a "proof" version of the card which I believe came from an uncut sheet.  It is slightly bigger than a normal card and is blank backed.  It does have the gold foil on the Cup logo and around the signature box along with the bottom Program of Excellence name and bottom border.  Not the most crisp Linden photo used, but I like it.  It's original.  And maybe it would've looked better in the final batch.  Or maybe that's why it got cut from the production line.

Anyways, this would have ended up being hard signed, but since it never left the shop...

When I saw this card pop up on eBay a few weeks back I knew exactly what I was seeing.  I knew the seller as well - sells a lot of "proof" cards.  A nice addition if you don't want to spend the money on the real thing, but it's pretty much not for me.  They aren't official releases and don't include jersey pieces of signatures....or backs.

But I definitely could make an exception in this instance.

I was even able to get the seller to come down on the price a bit.  Not sure they knew the whole situation with this card.

The stressful part came in the shipping.  Coming from the United States, I knew that it would take a little extra time to get here, but after a good month and a half went by I was getting worried.  A simple note to the seller explaining the situation - and the fact that I was not panicking led to a good door of communication being opened.  Patience wins out in the end though as it arrived safe and sound today.  I was thrilled to see it in the mailbox when I got home from work.

It's one of a very few "unofficially released" cards I have in my collection and in my opinion, this one is most definitely a worthy add.

In fact, I think it's quite excellent.
Posted by bamlinden at 11:58 PM