Last weekend was the final monthly card show of the season.  It also is the unofficial transition from winter quiet months at work to the hectic summertime season.  A time that in recent years has been partially responsible for me stepping away from the hobby.  Not necessarily a bad thing (as I think taking breaks....especially when things are in a funk....are good) but this year I'm not going to remove myself completely from the hobby world.

With all that is currently out there in the world of sportscards and with the struggling economy, there have been a couple of decent value finds out there.  I plan on keeping my eye open for future "good deals".  What I don't plan on doing is going on any sort of buying splurge.  Partially because I don't really feel like pumping out a bunch of cash for cards and partially because I think the market is flooded with stuff most people could care less about.

Which brings me to my show & tell for this post.

First of all, I'd like to preface by saying that I do not collect ITG Vault cards.  I was warm to the concept way back when it first was introduced but quickly slammed the door on them when I saw the ridiculous asking prices placed on many of these items.

Curious to see how those same people are making out with those $120+ Linden cards now (I bet they don't even command $20).  Flooding the market will do that.

The only interest I have in Vault cards are purely for documenting and my master checklist.  I could care less where these cards end up as time go by. 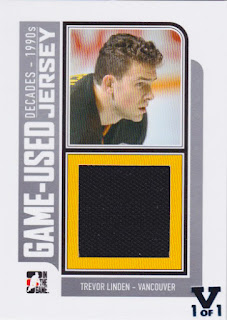 This Decades 90's Game Used Jersey Silver (with the blue 1/1 stamp) along with the next card were gifts from a local collector.  He knows I'm a die hard Linden guy and when he was cracking open some of the Vault product put these aside for me.

It's funny....I tried to say no thank you (didn't want to trade for them) and showed no interest but when he said "They're yours" and gifted them to me......well I couldn't say no.  It was a very kind gesture and so of course I will make an exception.

But when I look at this card I see not only a very nice gift from a fellow hobbyist, I see the ridiculousness of the Vault program.

Add to that (with the variations in stamp colours) another dozen or so (minimum) Linden "1/1's" and the head shaking and laughing ensues.

I've asked this many times......who is this product for?

Definitely not the set builder and certainly not the player collector.  Is it for the guys who love to pull the awesome patch cards that have been leftover from ITG's run in the hobby?  Sure.  But then why is a boring jersey card like this included?

It's nothing but a product dump and cash grab.  And many of the people opening this product see dollar signs on the secondary market.  Unfortunately they need to take the goggles off because these cards have flooded the market and crashed the "value" on these cards.

I will be extremely happy when this phase of my Linden collecting is over and I hope never to hear the word "Vault" again. 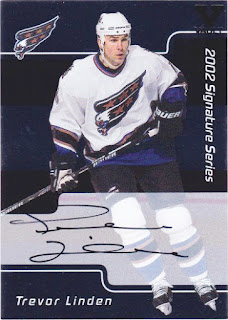 In addition to the fabricated 1/1 cards, ITG decided to throw in a bunch of autograph cards just sitting on their leftover shelf.  But rather than giving them one of ten different 1/1 colour stamp variations they just stamped it with a generic Vault logo (which sowed up poorly in the scan) and away we go.

That tells me that they had way more than 10 of each of these cards left in the stockpile.  Again, flooding the market with what has now become loonie bin signatures (or loony bin....depends on how you want to take that...ha ha).

Simply put, these cards do nothing for me - zero.  But I can't turn down the generous gesture of a gift.

And so with a hearty thank you, they will be marked off the list and put away....likely never to be looked at again.

Into the vault so to speak.
Posted by bamlinden at 9:39 PM