With May coming to a close tonight so too does my month of books (it was an unofficial month of books).  With multiple charity book sales going on in the city paired with some timely garage sales and a few trips to the library, I can safely say that I have enough reading material to last me for years.  In fact, I can assure you that I will never get through all the titles I purchased.  The collector in me is happy while the realist is wondering "What the heck!!??"

At the start of the month I learned of a really cool initiative championed by Indianapolis Colts QB Andrew Luck.  He started a book club.  I've never participated in a book club (let alone an online one) and was intrigued by the title chosen in the "veteran" category... 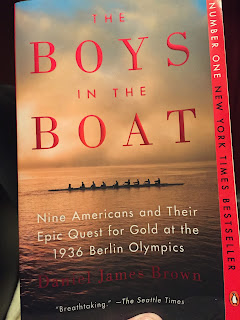 A lot of people pair this book with my all-time favourite - Unbroken, so I felt like I should chase down a copy and start reading.

Wouldn't you know it, a few days later I started volunteering for a huge used book sale here in the city.  Unloading and sorting hundreds and hundreds of donated books.  It took less than a day to find my book.  And I must confess...I bent the rules by cherry-picking the title early.  Normally we are supposed to wait for the sale to start.  I would like to make it known that I paid full price for the book (I didn't cheat the system THAT way).  I knew that if I waited for the sale....I'd be well behind where everyone else would be in the book.

So far so good.  I'm enjoying it and even participated in the first chat session.  Andrew video answered two of my questions.  I thought that was pretty cool.  If you're interested, grab a copy and start reading.  There's lots of time to catch up.


Now, you may have heard about my incredible find while I was sorting titles at the book sale.  C'mon....a signed Jacques Plante!!!!  One in a million.  Well, I can happily say that I bought the book (for $200cdn) as I had made arrangements to buy it for a Plante collector on the East Coast.  It arrived earlier this week and I've since been reimbursed.  So cool that I was able to help get the book into the hands of someone who will really appreciate it - all while bringing in a hefty sum for a great charity organization.

And the karma bug bit me just a couple days later when I finally got to do some shopping at the sale... 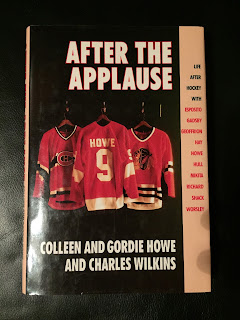 I learned a number of years ago that you should always check the front few pages of certain books.  Guys like Howe were consistent signers. 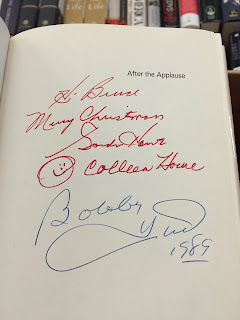 BINGO!!!  Not only was it signed by Mr. Hockey himself, but his wife Colleen and The Golden Jet Bobby Hull.

Now, I was in full customer mode when I saw this book so I took full advantage of it.  Four bucks.

Every day of the week I'm making that purchase.


Let's take a look at some of the other titles I picked up... 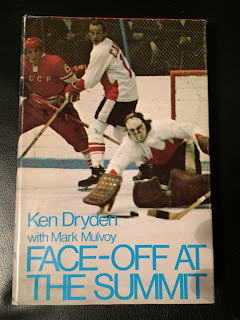 Ken Dryden's The Game is one of my favourite sports book - and tops on my hockey list.  Dryden is a great wordsmith.  I really need to read that one again.

This title is one I've never seen but I can only assume it's going to be good.  It is after all one of the most iconic events in Canadian sports history. 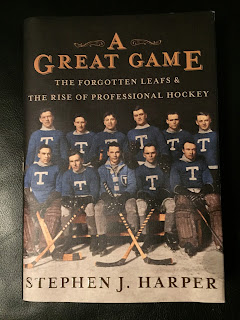 There were about 20 copies of this book handy at the sale.  I bought it because it was in like-new condition.  Couldn't say no to the price.

Not sure it'll be the page flipper or exciting read....but it's hockey.  Gotta do it. 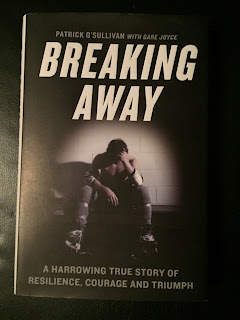 This one was a garage sale special (but I'm including it into the hockey portion of my show & tell).  Patrick O'Sullivan's story is an incredible one and there have been some strong documentaries and articles written about his struggles growing up.

Another book that was in like-new shape.  It's on the list. 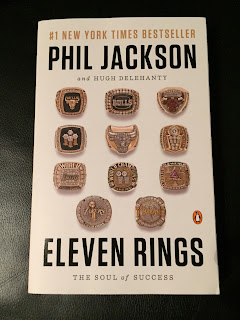 I've had my eye on this title for a while - even borrowing it from the library a couple times but never cracking into it.  Now I really have no excuse. 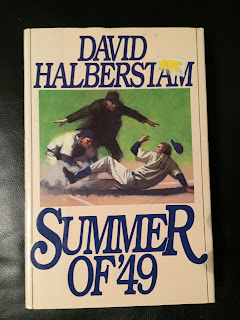 Consistently on the list of "All-time great baseball books", Summer of '49 might not resonate with me as an era in my mind but that's all the more reason why I should pick it up.

Halberstam, Roger Kahn and others aren't legends in the baseball book world for nothing.  It was a no-brainer. 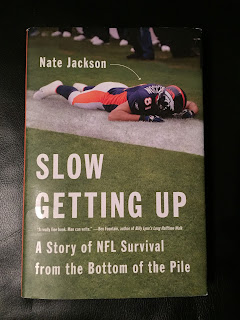 My lone football title was this Nate Jackson read.  A friend of mine recently read it and raved about it so it made the decision really easy for me.

I like the idea of hearing from the non-superstar and his quest through the world of pro sports. 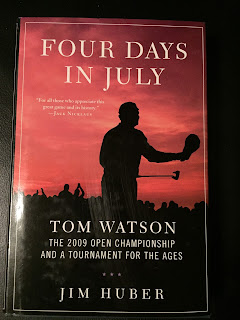 This guy on the other hand is no amateur.  What Tom Watson did in 2009 at the British Open rains one of the greatest feats I've ever seen.  Coming this close (fingers are REALLY close together) to winning a major at the age of 59!!  And with a hip replacement to boot.  That's just unheard of in golf these days.

Should be a dandy of a read.  I wish I'd have taken it with me on my golf trip. 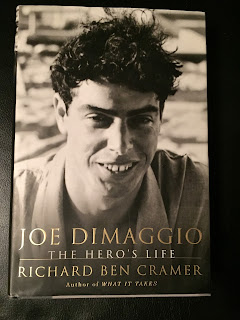 Another book on the "all-time greats" list.  I know so little about Joe DiMaggio and I don't know if this will get a quick pull from the shelf, but again the collector in me just couldn't say no.

That's what a lot of these titles are in addition to good reads....they're additions to my growing collection of sports books.  I like that. 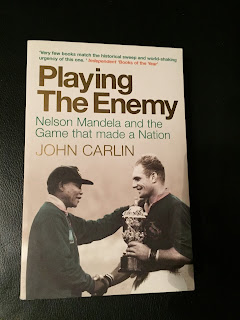 One of my favourite 30 for 30 documentaries (The 16th Man) was about this incredible story of the South African rugby team "Springboks" that shocked the world to win the 1995 Rugby World Cup.

The story was so much more than just a team that overcame improbable odds.  It was the coming together of a nation torn apart by apartheid and the recent release of Nelson Mandela (who's mission was to build peace through this underdog team).  It's an amazing story....so I'll read about it again. 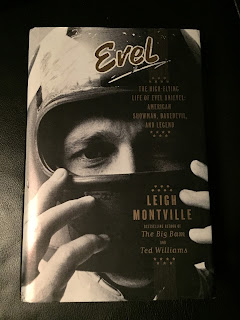 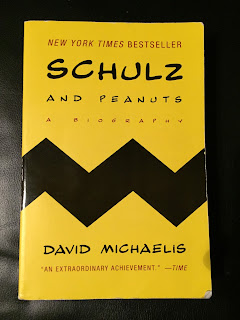 Surprise surprise.  I didn't just stick with sport titles at the sales.  When I saw this bold (and immediately identifiable) cover staring at me I snagged it up quick.

Who wouldn't want to learn more about the greatest cartoonist of all time.  Yes, I'm a Bill Watterson guy but you can't deny the impact Charles Schulz had on the world of comics.  Pretty much everyone lists him as an influence.

I wish there were official biographies for Watterson and Tom Larson (The Far Side) and maybe one day there will be, but to knock this one off the list is huge.  Looking forward to this one. 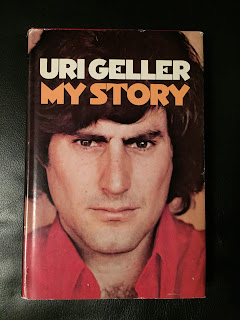 Lastly, Uri Geller (a vintage copy).  The cover is so funny.  I bought it on that alone.

So who is Uri Geller?  Well, there's a great documentary on Netflix called An Honest Liar.  It's about the world famous magician/escape artist The Amazing Randi.  Part of his mission in life is to expose the fakes who try to claim paranormal powers and profit from the gullible.

Uri Geller is one such faker.

Check out his appearance on the Tonight Show with Johnny Carson.  Classic!!

Finally, the one last book on my radar is about to show up at the library for me any day now (yeah...that's right, I have all these books and I go and rent one from the library).  I recently read a great article about Ty Cobb and am now just putting this title on the top of my list. 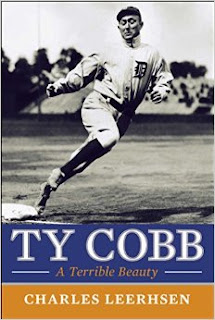 Basically, Charles Leerhsen has, through his dedicated research, discovered that the character of Ty Cobb that we have all grown up to hear about is nothing more than a myth.  He was not the racist, cheating thug looking to injure other players that everyone thinks of when they hear the name.  Heck, it's been documented numerous times in best-selling books and award winning documentaries.

Leerhsen goes to debunk the myths with hard evidence and in turn questions those who have documented the myth as truth.  I guess repetition can sometimes bleed into something believable.

It's officially the next title on my list after The Boys In The Boat.  And by what I see on my bookshelf, I better get cracking.  There's lots of pages to be flipped in this house.

Well....that about does it.  Thanks for sticking around this long to check out my haul and do yourself a favour and pick up a book.  Let me know what you are reading these days or what you've just finished reading.  Anything on your radar?  Have fun!!
Posted by bamlinden at 12:23 AM