LINDEN CARD OF THE WEEK - Sign Of The Times

I purposefully left this Linden card off my previous show & tell because I decided to share it as an individual pickup.....and to get a little something off my chest.

I'm a big fan of custom made cards.  I love the creativity and thought that goes into some of these unique offerings.  Heck, I've dabbled in them myself over the years.

But I've always thought that there was a line that shouldn't be crossed - and I fully realize that it gets crossed everyday.  For the most part I don't see it as I am out looking for it, but recently it crossed my path head on - and I bit my tongue for a while, but when I saw the comparison to the card I just picked up....well, here are my thoughts. 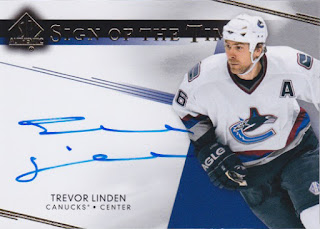 I really have liked the looks of the last couple Sign Of The Times auto cards offered up by SP Authentic.  The photo in the shot is a little closer up than the full body shots of previous years, lots of signature space and the design is clean and simple.  It's a sharp looking card.

I held off for a while before pulling the trigger on one of these because they either popped up for a strong price or they just didn't pop up at all.  I didn't think they were that rare (other SOTT cards weren't) so I just stayed patient and waited.

When I finally decided to snag one, I may have been a little temped due to the lack of Linden card purchasing in general....still, I paid a price I was happy with.

So when the package arrived, it was just a day or two after I saw this... 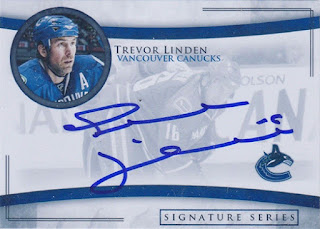 This "Signature Series" card is a custom.  Looks nice, has a strong autograph on it, I recognize the photo and is also a simple design.  A solid card all around.

My beef is that it has been plunked on eBay with an asking price that is over three times the price of the SOTT card - which is an authorized signature card from the only company that is legally able to use team logos.

A custom card is a great thing, but to slap it up on eBay, with full designation that it's a custom, does not clear the designer from all issues.  I'm gonna guess pretty strongly that the designer did not get permission fro the photographer to use that Linden photo.  And I'm also pretty sure that the NHL did not allow the designer to use the Canucks team logo.

I got a chance to talk to Canucks team photographer Jeff Vinnick a number of years ago and I really admire his work and (quite frankly) think he has one of the greatest jobs in the industry.  While I'm not sure if this head shot of Linden is his or not, it still bugs me that his photo just gets stripped off a Google search, slapped on a custom card and the thrust up on eBay at a crazy price.

A Linden auto tends to drift in the $10 range (at most) for his non-limited signature offerings.  This seller is asking $30 and feels that his ability to call it a SSP makes it not only rare, but desirable.  It pisses me off.  It's almost as if the seller knows that Linden gets good attention on eBay and is trying to capitalize on it (a quick search on eBay shows that this seller has over 1600 items up for sale....holy crap).

It's clearly not the first card custom he has sold on eBay and obviously it won't be the last.  I have no doubt that there are many custom card guys who have made a killing on the open market.  But it's a shame that these guys are doing it on the back of someone else's work.

Now I've seen a lot of the work the seller has done over the years.  He's a staple of custom creations on hobby boards and such.  He's done great work and I really like his attention to detail.  I'm sure he's done cards for many people....commissions and such, but I've never seen him flat out selling his stuff online until now.

Am I jealous that I'm not the one cashing in?  I don't know...maybe I am.  I would love to just sit in front of my computer, come up with custom cards all day and then sell them for top dollar.  But there's got to be some level of ethics....right?

Maybe I'm a hypocrite because I can definitely say that I've done my own google searches for my own custom creations, but I don't go out advertising my work and I certainly have not put them up on eBay for the highest bidder.  There's got to be a line.

In the end, I know that it is impossible to see the custom card world living in a space where everyone follows the rules and I know that it's impossible for all the photogs to get their just due for the photos they snap.  But when I saw that Linden custom signature card pop up, I just became a little more disheartened.  It just furthered the divide of what's right and wrong (in my eyes) and shoved it square in my face.

I hope I never see another Linden custom card on the secondary market ever.
Posted by bamlinden at 3:59 PM