When I first started collecting Oscar Gamble cards, I was excited to build the master checklist of cardboard to chase.  A far less daunting task that compiling my Linden list.  At the time #WalletCard had about 130 cards in total - a list that even with the 1/1s I felt I could tackle fully and completely.

Shortly after starting this project, I discovered that Topps were inserting buyback cards into some of their products.  That created a bit of a challenge as it's not normally advertised which cards are stamped and inserted into products.  I really had no guide as to which new cards to include to my list.  The only thing I could do was add it once I physically saw a copy pop up somewhere.

Since that chase has begun, I have seen 11 different Oscar Gamble buyback cards...and I've been lucky to land most of them.  A couple more hit the mailbox recently. 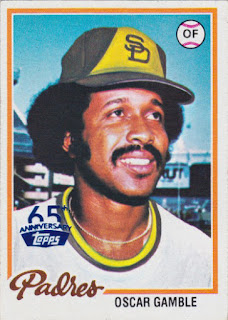 This card comes from a robust buyback offering where multiple stamp colours were used to indicate the level of scarcity.  They ranked as Black, Red, Blue, Silver and Gold (1/1).  Now I don't know if a blue stamped card means there are black and red versions of it as well but as I mentioned earlier, I'm just adding them as I see them.

It's weird, as I type this I can't help but look at the comparisons to these stamped cards and ITG's Vault stamped cards (which I really don't care about at all).  Why do I enjoy chasing one but not the other?

I think it has to do with the limited number of overall buybacks with my #WalletCard as opposed to the over saturation of Vault cards put out by ITG.  I also think that many secondary sellers of the Topps buybacks know that these cards aren't $20, $50, $100 cards whereas Vault...... 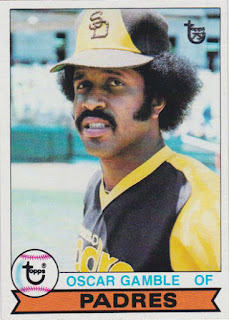 My first question is - How can Topps celebrate a 75th Anniversary in 2014 and then cheer on a 65th Anniversary two years later?  Odd.....but I'm sure there's a reason for it.

This cards crosses off the final buyback from the 75th series that I have seen - all four cards stamped with the little silver Topps75 in the corner.

Let's admire the sweet uniform for a moment.  The Padres getup is particularly strong circa late-70's.  The jersey, the cap.  I'm sure the pants have stirrups to complete the trifecta.  It almost....ALMOST detracts from the strong 'fro and pork chop sideburns that Oscar is sporting.

I've got one more buyback in the queue and have my eye on the 1976 Topps Original Buyback #74,  the elusive last card (for now) on my buyback checklist, which is on COMC for about 3x what I hope to pay.  Hopeful to make a deal on it soon.