LINDEN CARD OF THE WEEK - A Good Finish To The Year

When I take a look back at the past year of my Linden collection I see two very different things...

I can find a good 10-12 cards that would compile a strong Top 10 list of pickups but I also notice some very slow progress on my master list from the past 2-3 years of new additions.

So my feeling of it being a bit of a roller coaster ride seems to fit.

With the hobby changing so drastically over the past few years and subsequently my collecting habits - especially with my Linden pc, I've been much more aware (and downright picky) when it comes to which cards I chase and ultimately how much I choose to pay for them.

While it hasn't diminished my love for collecting, I can say with great conviction that I'm acutely aware of what's going on in the world of Linden cards.  And I think that has been a benefit most times when I do pull the trigger.

Case in point, this most recent pickup - my last Linden of the 2016 year. 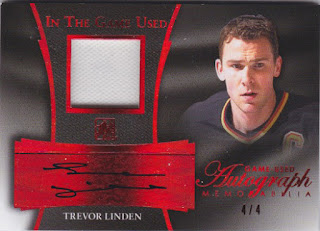 This doesn't look like the most impressive card.  Sure it's numbered out of 4 but uses the same headshot as Leaf did the year before, is a simple sticker auto (which is understandable as shipping out such limited numbered cards for a person to sign in person makes no sense) and really just has a color change to designate the parallel.  And you just knew it was going to be a plain white jersey to boot.

So what had me chase this one?  Well, I still see myself as a completist.  I do pay attention to every Linden auction on eBay and try to keep an ear to the ground online when it comes to new offerings.  When something pops up that I need, I keep tabs on it.

With this particular Linden, I knew that cards from this product were going for very low prices (as have most Leaf cards....they just don't hold their value) but I also knew that there were not 4 copies of this card up for grabs anymore.  In fact, I found out later that there were only 2 copies left to be had in the open market.

So grabbing my copy at a fraction of the price it would have demanded a few years ago made it a good buy in my eyes.  But really, that's all it is.  I hate to say that but it's true.  This card will definitely not make any Top 10 lists any time soon.

But I am left with the enjoyment of buying it for a good price and for knocking it off my list - two things that I will be taking forward with me into yet another year of Linden collecting.

I guess if I was doing resolutions...those would be it.

But I am confident that I will also be coming across some Linden cards that will just flat out knock my socks off.....I've yet to go through a year where that doesn't happen.
Posted by bamlinden at 11:58 AM