I apologize in advance...but I'm going to get a little ranty this afternoon.

A few weeks ago we saw the latest release from the Tim Horton's trading card release put on by Upper Deck.  These have been a fun chase for many over the past three years (3??...4??...anyways) with a simple base set to build, some nice insert sets, tougher hits and a few impossible pulls (this year it's the Crosby signed card /87).  I've fancied a few packs over the years when I've gone to buy a cup of hot chocolate on a cold morning as I head to work.

A couple weeks ago a co-worker and I got into talking about hockey cards (and the ever-popular "I have a whole bunch I should bring in"...only to be early 90's junk wax base).  It was a lot of fun to just reminisce about players from that era, bad photography, overproduction and cheesy inserts.  It was awesome.

He asked what kind of products were out there these days and I told him that the landscape has completely changed.  But a good starter product could be these Tim Horton's cards.  I talked about how you can go about buying packs, what kind of stuff to expect in them and their initial wave of popularity.  He was genuinely excited. 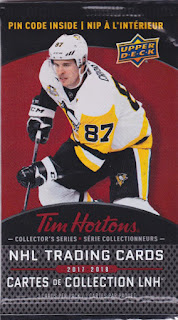 Over the next week he was showing off some of the cards he had picked up and I helped him out by giving him the pack or two that I had bought (obviously I didn't hit the big inserts.  Ha ha.)

Fast forward to a few days ago when I went to the Timmy's by my house.  I placed my order and asked for a pack of cards.  "Sorry, we're all sold out".  What??!!  I couldn't believe it.  Hundreds of packs gone in a matter of a couple weeks?  Gotta say, I was pretty bummed.

But as I drove off I thought about it.  I really shouldn't have been surprised.  Why?  Seems as though you can now buy unlimited amounts of packs in one shot if you have the cash.  And where there's an opportunity, there are people looking to take advantage of it.

I get it.  There are cards out there....it's clearly pointed out that if you want to buy additional packs it'll cost a little more.  But boy it sure sucks as a person just trying to have some fun with the product to now have to go to the secondary market to get my fix.

And it was out there in spades today at the local card show.

Pretty much every table had a selection of Tim Horton's cards - from the umpteen dozen packs they must have opened to get the sheer volume of product on their table.  I went up to one guy and he asked what I was on the hunt for and I brought up the topic of Tim Horton's cards.  He said he "has it all" - and he sure did.  Boxes upon boxes of unopened packs - cases even.  The guy must have bought out stores of the stuff (probably the Timmy's I go to).

I mentioned that it was frustrating to go to a Tim Horton's hoping to buy a pack and find they are all sold out.  He didn't even flinch.  He asked if I was looking for anyone in particular.  Yeah...some packs so I can have fun opening them and maybe help someone build a set.

I get it.  There's a pocket of time where people can binge on a product and have a good chance on some return.  But boy does it suck the life out the hobby when a person can't even buy a stinkin' pack of the product because they're all sitting on dealers table at the local card show.

Yes, we all look for those opportunities to make a buck.  I do it myself.  Heck, I did it at the show today. 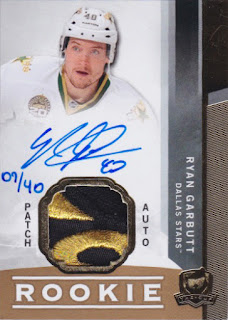 I bought this card for the single purpose of maybe being able to flip it for a card I will want for my pc later - or yes, even sell it for a bit of a profit.  I have no idea who this guy is or if he is still playing in the league.  But for five bucks.....I'll take a chance on a Cup rookie auto patch gold /40.

But I refuse to be put in the same category as the guy who is hoarding unopened packs of Tim Horton's cards.

What sucked even more is going to the next table and being told the best way to build the set.  "Don't buy a pack here...buy a pack there....you'll never build the set that way.  Buy a box and you'll have basically two full base sets.  That's the way to do it."

How about buying packs, opening them and then maybe....MAYBE trading for the cards you need - especially the base.  After all, that's what it says on the friggin' wrapper.  Trading cards.

Guy looked at me like I was an alien.

And then he had the gall to complain because there were guys who had last year's product and couldn't get rid of it.  Are you kidding me???  You want pity because you over-purchase the product and then can't sell it?

This is a hobby I love - and will defend until my dying breath.  But it really takes the wind out of me when I see this kind of approach to "collecting".  Upper Deck and Tim Horton's have a really good thing going but they blew it when the opportunity to buy in mass happened.  Like I said, put an opportunity out there and someone will abuse it.

I'm curious to see what kind of reaction my co-worker will have when I share this info with him on Monday.  Will he want to race out and buy packs at a Timmy's that might still have the product?  Will he want to go to the next card show with me and gobble up everything in sight?  Or will he just give up on the chase and toss the cards aside because the fun of buying a pack might not be there.

Sadly, it's the third option that happens more and more.  And people wonder why we can't get new blood into this hobby.
Posted by bamlinden at 4:24 PM