RAISE THE CUP - A Pair Of Show Pickups

OK....let's show off a couple fun cards for one of my fave projects of the past few years.

I've been working on my 'Raise The Cup' project for almost 8 years now.  It's such a simple concept but really shows off the flexibility and creativity that this hobby can bring - a collection of cards that depict players raising the Stanley Cup over their heads.  It's the pinnacle moment of their playing career and you can definitely see it in the faces of the players.

What I love about this build is that it is limitless - as long as photos of Stanley Cup champions show up on cards (and there have been tons of those recently), there can be cardboard to chase.  I love that it began as a comment to me about a photo of Lanny raising the Cup and has just grown into a fun, inexpensive collection.

That's what I think is the greatest aspect of this hobby - it can be whatever I want it to be.  If I want penalty box cards - I can do that.  If I want face-off closeups or glove saves - no prob.  How about goal celebrations - indeed.  The parameters of what I chase is fully formed from what I want to go after.

So what have I got to add to this set??? 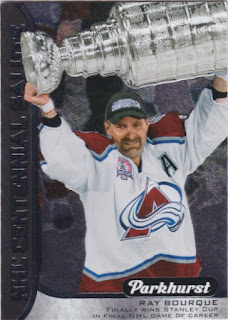 I remember watching this final series, and the final game, with eager anticipation.  It was exciting to see such a legend in the game finally win the big one and raise the Stanley Cup.  To see Joe Sakic hand the Cup over to Bourque so he could hoist it first was pretty special.

Seeing this card really brings those memories back.  You can see the emotion etched in his face and the relief and exhilaration as he finally realizes his dream.

This is the exact type of card I love for this set.  Cost less than a buck and has a great photo. 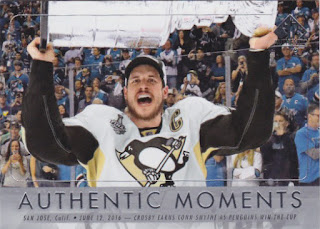 Sid the Kid has certainly carved out an incredible first half of his career.  No question he's the top player in the league today.  He's got all the tools and now has 3 Stanley Cups on his resume.  Incredible.

With all of his success, I'm surprised there aren't more Cup raising cards out there.  I think this might be my third or fourth in the binder - and I know there are some dedicated insert sets that include him, but I would have expected many more.

I like this photo because he's looking right in the camera.  Yes, it might look a little more "forced" as opposed to a genuine reaction to lifting the Cup, but it's still a nicely framed shot.  I'm on the fence if this would have been better suited to a vertical card layout as opposed to this horizontal offering.

Anyways, these were a pair of great finds from the big card show here a few weeks back.  Again, it's nice to dig in boxes....not really knowing what one might find.  There's really no checklist to this set, I just put them aside when I discover them.  It's what I love about card shows.


I've been brainstorming what other kinds of projects to consider that have the same level of  inventiveness (as I've finished my '1 vs. 100' project a couple years ago now).  Seeing these cards might just replenish the creative juices.