PARKIE PROJECT - A Pair Of Pickups From My B.C. Trip

It's been 8 years since I pulled the trigger on this Parkie Project. This past year saw me add a couple more cards to the collection and has me near the 25% completion mark.

So at this rate...I might just finish this project in my lifetime.  :)

Seriously though, this has been a passive pursuit at best. I've been very hesitant to pick anything up ungraded online and am finding that graded copies are a little more money than I'd like to spend (especially for common players). So when the opportunity was staring me in the face a couple months back, I decided to throw a bit of caution to the wind and just have some fun.

I was out in British Columbia at the end of October and was thrilled to find out that there was a monthly show happening on the same weekend I was there. It was a beautiful day, sun shining, and I had a nice car rental...so I decided to make the 45-minute trek to check it out.

I was so excited to go to a show that would have new tables, vendors, boxes and showcases for me to explore that I made the trip out there on the Saturday...and the show was on Sunday. Undeterred, I enjoyed the car ride back and made the trip again the following day.

I was hoping to pick up some Linden cards primarily but was surprised to find that he was not a prevalent player on the tables. The new crop of Canucks were reigning supreme. I did find one auto card of his...but forgot that I already owned a copy of it. Sometimes you just gotta laugh.

But I did come across a few 51/52 Parkhurst cards that were in the condition range that I was looking for. Unfortunately, the prices on the toploaders weren't what I was hoping they'd be.

I had gone to the show with a budget in mind...and I was well under that amount...so I decided to splurge a bit. 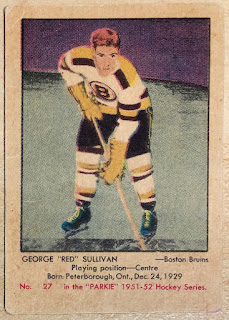 This is the kind of card I like to see when chasing my Parkies. The centering is nice, the colours seem decent, clean back, no creases. Sure, the corners are not great, but there's a feeling of consistency and symmetry that I find appealing.

When I place it alongside the other cards in my PC, it fits in perfectly.

So when I say that I decided to splurge, this card had a pricetag north of $40. I've only paid more than that once in my Parkie pursuit...and that was for a very nice Turk Broda copy. No way was I going to spend $40.

Let's see if I can get a bundle price. 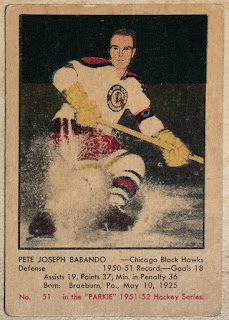 I think pretty much all the cards from this set are rookie cards.  :)

Second verse same as the first. A nice aesthetic to the card, had everything I want...except the price.

The seller had a few others, but they weren't as nice (had creases and such) so I finally asked what he would do for the pair.

I wasn't interested in them at that price. So I did a few laps around the show, checking out other tables, other cards for my collections. Near the end of the day, I went back and offered $60 for the two. I wasn't thrilled with the price...but I didn't think I could get them for any less than that.

By no means do I have 'buyer's remorse'. I am really happy to add a couple more cards to the Parkie Project and in looking at what these cards sell for these days...I think I did ok. Not a steal of a deal by any means, but progress on a project.

And a couple nice pieces of cardboard that will remind me of my time in BC...when I drove out early to a card show.

Can't put a price on that.

Posted by bamlinden at 3:58 PM