This week's card features my three favorite colors when talking about Linden cards...white, yellow and orange. 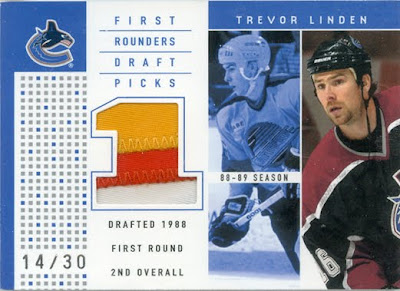 Now, the back of the card says that the patch comes from a jersey worn by Trevor. It does not say that it was from his rookie season (which by looking at the card, one might assume). I am guessing it is not from a rookie jersey. Still...I could care less.

With only 30 copies of the card in existence, this rare release has been a popular card for both the player collector and set builder. Having to wait a good 5 years before I landed it shows me that these were gobbled up early. I'll be surprised to see 2 or 3 of these over the next few years. They just don't surface.

When I did see this card pop up on ebay, I grabbed the 'Buy It Now' without hesitating. I knew that I overpaid for the card, but I felt it was still within reason (meaning it wasn't the most I had spent for a Linden at this point).

I'm glad I made the purchase looking back now as it is one of my favorite cards in my Linden collection. It's my favorite Linden featuring the vintage colors (the stitching on the card really pops it over the top).

I just wish the photo of him on the front of the card from his rookie year was the prominent photo (and in color). I can just imagine the yellow uniform and helmet - gotta love the yellow.

Quick bit of trivia...on the front of the card, it says Linden was drafted second overall in 1988. Who went number 1?
Posted by bamlinden at 10:51 PM