Here it is! The knowledge base that sent me to the top of the regular season pool somehow figured that THIS would be the winning playoff draft. 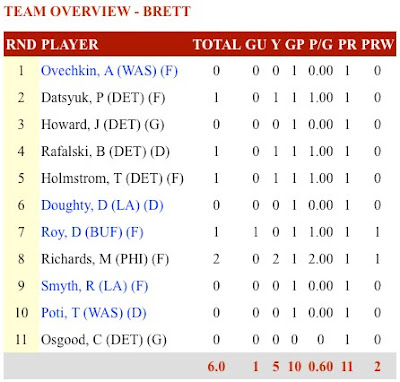 First of all, let me say that I hate my team. I hated my team half way through the draft. I cringed when I said the name Drew Doughty. I cringed more when Mike Richards came out of my mouth. I was banging my head on the wall when Tom Poti was my final selection.

This is one ugly team.

Just so you know, I chose 3rd in a 9 person reverse draft. I was stunned to get Ovechkin (although after last night's game he's not looking too swift).

It seemed that goalies and defencemen were being snapped up at an alarming rate. As well, it was in almost every round that I would have my pick ready only to have the guy choosing before me take him. Once or twice in a pool is common. Seven or eight times is ridiculous.

It'll be a miracle for me to somehow pull this rabbit out of the hat.

That said, I have been known to dabble in magic.
Posted by bamlinden at 12:35 AM